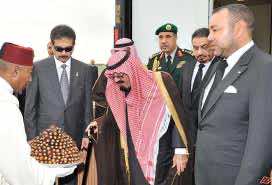 Who said that the Arab revolutions did not cause change in the geopolitical environment of the region? For some time, there has been a shift in the lines of hostility and a repositioning of alliances. While three months ago we announced the accession of Morocco and Jordan to the Gulf Cooperation Council, today the United Arab Emirates has endeavored to prevent this project- championed by Qatar and Saudi Arabia- from materializing.

The recent statement of the UAE Minister of Foreign Affairs on the subject, if it has surprised many, came, indeed, as no surprise in Rabat. Moroccans, who were in no hurry to join the Gulf conglomerate, were informed by the Saudis and Qataris of the reluctance of Abu Dhabi.

According to informed sources in the Saudi capital, three countries are preparing a political-economic axis, namely Turkey, Saudi Arabia and Morocco.

The victory of moderate Islamists in the early parliamentary elections on 25 November in Morocco gives more meaning to this axis. The AKP, in power for ten years in Turkey, maintains the best relations with their brethren of the Moroccan PJD. In the future, Doha could be part of this “alliance” if Riyadh finally agreed to return to better sentiments about the Emir of Qatar.

Concerning the reasons for the formation of this axis, the Saudi sources confirmed that the choice is not accidental. The three capitals maintain amicable relationships and their regimes appear more stable today. “If Egypt, Tunisia, Jordan have been excluded for the moment it is that their political systems are not sufficiently stable,” said a senior Turkish official in a visit recently in Paris. “Egypt is poised for a long transitional period and Tunisia will need at least two years before achieving full stability.

In addition, “the economies of both countries are now bloodless,” continued the high-ranking Turkish official, who is part of the team working on the axis in Ankara.

On the other hand, the three countries, whose experts ensure the completion of the details of the project, are still hesitant about the formation of such an axis. What is certain, however, is that they should act quickly to strengthen the diplomatic position of the three countries in the face of the thorny issues of the moment, such as the situation in Syria or the Iranian question.

Translated by Samir Bennis and edited by Benjamin Villanti

Translated in agreement with Maghreb Intelligence