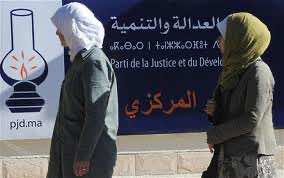 The latest spectacular victory in the legislative elections of the Moroccan Islamic moderate Party of Justice and Development, in consideration with the triumph of the Tunisian Islamic Ennahda Party and the lead of Egypt’s Muslim Brotherhood in the parliamentary elections, raises some important questions about the status of religion in Arab public life.

To what extent is conduct, for individuals and communities, governed by religion? Did the past attempts by those in power to eliminate Islamic currents and secularize society fail?  Are Arab communities naturally religious? Is the Western (generally secular) model of Democracy the only one, or can democracy be adjusted to meet people’s spiritual needs? I will consider these questions in light of the provocative changes taking place during the Arab uprising, focusing on the Moroccan “Serene Revolution.”

Cultural traditions should be taken into account when applying the principles of Democracy. An examination of the history of Muslim society shows why religious oriented political parties remain popular in the Arab world today, and shows how the Western experience of Democracy isn’t necessarily universal.

The Western emphasis on the separation of church and state can be understood if we recall the centuries of bloody religious wars in Europe between Christian factions. But the history and legacy of the interplay between religion and government has been different in the East.

Many historians and scholars describe the historic tolerance of Islamic societies to religious pluralism—the situation is much different today, of course.  Religion with its prescriptions on behavior and morality offered clear guidelines for rulers, and checked the autocratic political ambitions of the Sultans and Caliphs. This serves in part to explain the success of the Moroccan PJD, the Tunisians Al-Nahda, and Egyptian Muslim Brotherhood in free and fair elections after decades of despotic regimes.

I admit the Arab Spring had secular origins. In Morocco, Libya, Tunisia, Egypt, Yemen, and Syria the first wave of revolutionaries came from the middle class. But assuming that these demonstrations are primarily secular is as mistaken as assuming they are driven by the elite.

Faith is as intertwined in the revolutions as it is everywhere in these societies. Many Islamic parties were present in the Arab revolutionary scene from the start, whether timidly or actively, and became more wholeheartedly involved once the power of the protests became apparent. The Moroccan PJD capitalized on the King’s willingness to be flexible to enter firmly into the changed political arena.

A variety of Islamist factions participated in the Arab revolutions. For the Egyptians, the Muslim Brotherhood played a role, as did the remnants of Jihadist Salafis, media-savvy Salafis like Safwat Hegazi, and independent Islamists like Amr Khaled. In Tunisia, followers of the Ennahda Movement took part in the revolution.

In Libya, Abdel-Hakim Belhaj, a former jihadist, led the final assault on Tripoli. In Morocco, the Justice and Charity group played a crucial role in February 20th Movement and its members spearheaded hundreds of fierce demonstrations throughout the country. In Yemen and Syria, the Muslim Brotherhood continues to fight against the regimes of Ali Abdullah Saleh and Bashar Al-Assad. Mosques were used as centers of mobilization for the masses. Many political rallies began at mosques.

Efforts made to liberalize and secularize Moroccan and other Arab societies were a fiasco because, to begin with, Arabs were content with their religion. Also, advocates for secularism and liberalism lacked the sense of morality and strong value system to gain the trust and approval of the people.

Arab societies, especially the upper middle and lower classes have, spontaneously and in spite of the regimes constraints, adopted the mannerisms of religiosity as modern and fashionable choices. More women are wearing the Hijab and young men prefer to be bearded. Independent preachers are gaining in popularity, as are Islamic schools and Islamic banks and religiously-oriented TV stations. As further evidence, many Americans and Europeans are converting to Islam.

To conclude, a naturally religiously community guided spiritually and politically by religious prescripts with a government that represents—in the fullest sense of the word—them, constitutes a solid foundation to build a prosperous state. The challenge is for the conflicting Islamist factions to integrate into the new political sphere, revising ideology and doctrine to meet the socioeconomic and psychological needs of individuals in an increasingly digital and intolerant world.

Mahmoud Seddik is a contributor to Morocco World News. He blogs at: www.mahmoudsadik.blogspot.com.