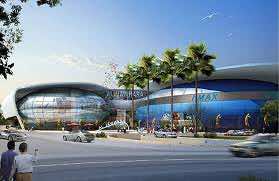 Fez – Located on the Atlantic cost of Casablanca, Morocco Mall is one of the five largest malls in the world, and the first and only destination mall of the Mediterranean region and Africa.

Morocco Mall represents a magnificent mixture between modernity and tradition. Modernity is manifested in the latest and most sophisticated services a mall can provide to its customers, as well as contemporary architectural designs that keep up with all the up-to-date facilities.

On the other hand, tradition is also given a high value in Morocco Mall. This can be seen in the staggering traditional architecture in some sections, especially in the M’dina section, which is dedicated for traditional handcraftsmanship. Morocco Mall is a unique place where families and friends can get together for a magical experience that ranges from shopping to entertainment of various sorts.

Morocco Mall is the result of the collaboration between Askal Group and Al Jedaei Group with a total investment of 2 billion Dirhams ($255 million US dollars).

Construction first began on the ten-acre project in 2007. Situated on the Atlantic Coast, 250,000 m² are devoted to the superstructure with 30,000 m² of external recreation space and 14,0000 m² reserved for parks. David Padoa, chief architect and CEO of Design International, an architectural firm specializing in international malls and centers, designed and executed the project.

Since the start of its construction Morocco Mall has employed over 100,000 people of various trades. Now with its completion, the mall will create job opportunities estimated at 5000 direct jobs and 21,000 indirect ones; 90 to 95% of shop employees will be hired locally.

It is also expected to receive up to15 million visitors each year. Morocco Mall will contain 350 shops offering more than six hundred of the most sought-after international fashion and design brands, including Christian Dior, Louis Vuitton, Fendi, Ralph Lauren, Gucci, Mango, Zara, H&M, Prada, Guess, Lacoste, and GAP, among others.

The space also features forty restaurants offering spectacular views of the grounds; plus a musical fountain, only the third of its kind in the world; and an enormous cylindrical fish basin containing more than a million liters of water. The basin is filled with 3,000 nautical objects from around the world, on display to visitors by way of a panoramic elevator that ascends through the water.

Morocco Mall also offers to its customers a wide range of entertainment programs and facilities, such as: Morocco Mall musical fountain which is the third of its kind in the world; Aquadream, which is a sea water aquarium with extraordinary dimensions; IMAX 3D cinema which is the first IMAX 3D in Africa; Adventureland, which is dedicated to the youngest generations through games, arcades and other attractions; and MIRAJ, which is the V.I.P lounge situated at the heart of the luxury section of the Mall overlooking the musical fountain and offering a direct view of the ocean.

What makes Morocco Mall a unique place is its blend between the global and the local, between what is Moroccan and what is international. With all the latest and most famous brands and labels around, one could feel like they’re traveling to another destination.

At the same time, the M’dina section is a very important section that preserves the Moroccaness of the place, visiting it is like a rediscovery of Moroccan heritage and traditions.

The section is divided into four main zones that represent four different regions of Morocco: Fez, Marrakech, Berber and Souk Addahab (Gold Souk). The Mall also offers an exhibition space of 24 m² that will give Moroccan artists a chance to exhibit their work to all the visitors of Morocco Mall.

Morocco Mall is not just a mall for shopping and entertainment, it is also a cultural space that provides a special journey of discovery of different cultures as well as a unique celebration of art in various forms.

Morocco Mall: sign of attractiveness of the Moroccan economy

The inauguration of Morocco Mall comes against the background of a volatile geopolitical environment in the Arab world, ushered in since the beginning of 2011. Whereas other Arab countries are still in the midst of instability and uncertainty about the future, Morocco further confirms its status as a favorite place for foreign investors.

As recently as last Thursday November 24, on the eve of Morocco’s legislative elections that resulted in the win of the Party of Justice and Development, the Emir of Qatar paid an official visit to Morocco. The visit was crowned by the signature of four bilateral partnership agreements at  a ceremony presided over by King Mohamed VI and the Emir of Qatar, Sheikh Hamad Bin Khalifa Al-Thani.

The first partnership agreement provides for the establishment of a Moroccan-Qatari investment company. The two countries also signed a Memorandum of Understanding voicing their commitment to cooperate in the field of tourism.

An additional Memorandum of Understanding on cooperation in the sector of mining was signed between the Moroccan Office of Hydrocarbons and Mining (ONHYM) and a Qatari mining company.