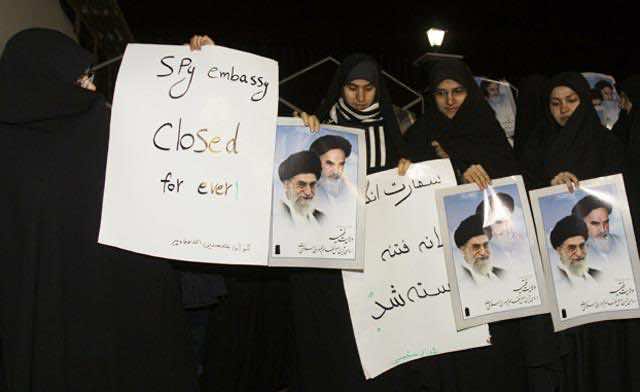 Iran’s diplomats expelled from London over the storming of the British embassy in Tehran this week arrived in the Iranian capital early Saturday, Iranian media reported.

About 150 hard-line students waiting with flower necklaces were gathered at Tehran’s Mehrabad airport early Saturday to give the roughly two dozen diplomats and their families a hero’s welcome.

But the Iranian government, apparently opposed to any high-profile display that could worsen the fallout, took the diplomats off unseen from a backdoor, reflecting Iran’s own internal political rifts.

The diplomats were expelled from London on Friday in retaliation for the violent incursion ofBritain’s embassy and a second diplomatic compound inTehran on Tuesday by hundreds of pro-regime Iranian protesters.

Britain, which evacuated all its own diplomats from Tehran for their safety after the attacks, closed its embassy and ordered Iranto do likewise.

It said the assault on its embassy could only have occurred with tacit consent from Iran’s leaders.

Iranian foreign ministry spokesman Ramin Mehmanparast, who was at the airport to receive the diplomats, noted moves by other EU nations backing Britain.

“Now the British government is trying to involve other European countries in our bilateral issue. But we have told the Europeans not to trouble relations with Iran because of Britain,” he said, in remarks reported by Fars news agency.

The assault on the British embassy and subsequent downgrading of diplomatic ties between the two countries to their most minimum level has tipped into crisis a showdown between Iran and the West over Tehran’s controversial nuclear program.

France, Germany, the Netherlands and Italy have recalled their own ambassadors from Tehran for consultations, to show solidarity with Britain. The European Union tightened sanctions on Iran and warned extra measures on Iran’s financial and oil sectors could follow.

The pro-regime protesters who went on their anti-British rampage Tuesday were reflecting official fury at new British sanctions cutting off transactions with Iran’s entire financial sector, including its central bank.

The sanctions were coordinated with similar measures by the United States and Canada.

Britain’s ambassador to Iran, Dominick Chilcott – now back in Britain – offered new details about the attacks, saying the experience had been “frightening.”

“We had no idea how it was going to end,” he said, describing how the mob trashed rooms, damaged furniture, scrawled graffiti and tore up a portrait of Queen Victoria, as staff took shelter in a secure area of the embassy.

“It felt like very spiteful, mindless vandalism, but it wasn’t quite mindless,” Chilcott said. “They removed anything that was electronic – mobile telephones, personal computers – anything that might give information about who you were talking to or what you were doing.”

At one point, the intruders started a fire inside the chancery building, forcing the staff to leave the safe area, climb down a fire escape and exit the building. A small number of police escorted them to a building on the edge of the compound and told them to lie low.

“We turned all the lights out and we sat in the dark and we could hear the noise of the intruders going on around us,” he said.

He said seven staff at a separate residential compound that was also attacked were seized and “quite roughly handled” by the invaders.

British Foreign Secretary William Hague has led the accusations that the rioters had a green light from Iranian authorities, including the powerful Revolutionary Guard. On Thursday, he said the attacks were “clearly premeditated” by high-ranking officials.

Iranian government officials said the storming of the embassy by angry protesters was unexpected and Iranian police intervened to protect the British diplomats and get the attackers out of the buildings.

But according to Chilcott, “Iran is not the sort of country where spontaneously a demonstration congregates then attacks a foreign embassy. That sort of activity is only done with the acquiescence and support of the state.”

The demonstrations had been organized by hard-line groups on university campuses and Islamic seminaries and included denunciations of the latest sanctions on Iran over its nuclear efforts.

Such major anti-Western rallies are rarely allowed to occur without official approval and often include state-backed forces including a paramilitary group known as the Basij, which is part of the vast security network controlled by the Revolutionary Guard.

Hard-liners in Iran have said the embassy attack was an outpouring of the wrath of the Iranian people who believe Britain is a hostile country seeking to damage and weaken the Islamic Republic. Mohammad Mohammadian, a representative of Iran’s Supreme Leader Ayatollah Ali Khamenei, praised the attackers, saying they had targeted the “epicenter of sedition.”

The obstruction of Saturday’s welcome ceremony reflected the disagreements between hard-liners and the government of President Mahmoud Ahmadinejad, which opposed downgrading relations with Britain and condemned the attack on Britain’s embassy.

For months, Iran’s ruling system has ordered arrests and intimidation against political allies of President Ahmadinejad, who has sharply fallen from favor after challenging decisions by, Khamenei, the head of the theocracy.

Ahmadinejad has remained silent since the attacks, but his supporters have raised questions about whether Iran’s interests are served by a diplomatic battle with the West.

Foreign media in Tehran on Thursday were told covering all anti-British, pro-regime demonstrations was now forbidden – an unprecedented restriction that adds to many other reporting curbs already in place.

Iranians staged a fresh anti-British demonstration in Tehran on Friday in support of the storming of the British compounds, according to the official IRNA news agency