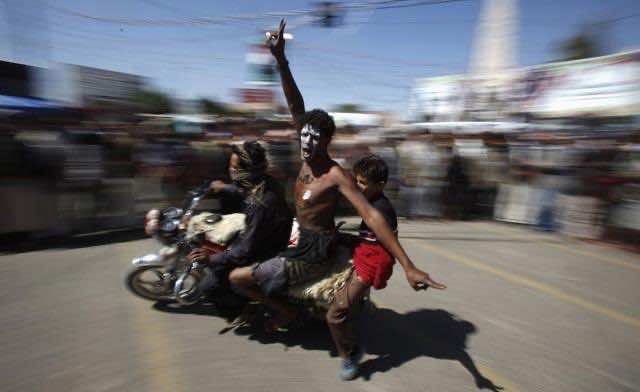 Five Yemenis, three civilians and two anti-regime gunmen, were killed on Saturday in shelling by government forces targeting the country’s second city of Taezand in shootings, medics and witnesses said.

Three members of one family were killed in shelling blamed on government forces, while two gunmen were shot dead during clashes with forces loyal to President Ali Abdullah Saleh, witnesses said.

The five bodies were taken to a field hospital in al-Rawda neighborhood in central Taez, which is under the control of anti-Saleh protesters.

The new casualties take the death toll of clashes and heavy bombing by government forces since Thursday to 30, after nine people, including a young girl, two soldiers and colonel, were killed on Friday.

A deal to ease Saleh from power has yet to defuse 10 months of violent unrest over the autocratic leader’s fate and the political future of impoverished country.

On Thursday, 16 others, including five soldiers and three gunmen, were all killed in clashes and bombing.

The escalation of violence came hot on the heels of an order by Vice President Abdrabuh Mansur Hadi late on Friday to cease fire and negotiate a pullout of troops and militiamen from the city.

Hadi now holds the constitutional powers of Saleh who last month in Riyadh signed a Gulf-brokered power transfer deal under which he transferred powers to his deputy and remains honorary president for three months.

Gunmen backing anti-Saleh protesters control the centre of Taez and most of its streets, while government forces have taken up position on hills within the city and on its outskirts.

Witnesses said that forces loyal to Saleh continued to bombard most neighborhoods in Taez, while clashes raged in western parts of the city, including al-Hasab, Beir Basha, Wasi al-Qadi and al-Murur.

The bloodshed sparked recriminations between the government and parliamentary opposition, which signed the hard-won accord in Riyadh last month that had raised hopes of an end to the violence.

Prime minister-designate Mohammed Basindawa, chosen by the opposition to head a government of national unity under the power transfer agreement, has threatened to resign unless the loyalist offensive against Taez stops.

And opposition spokesman Mohammed Qahtan accused Saleh loyalists of blocking the formation of a key commission also stipulated by the accord that is to be given the task of reuniting the deeply divided security forces.

Hadi late on Friday ordered the governor of Taez to begin talks with the Common Forum opposition aimed at reaching a ceasefire and the withdrawal of troops and militias from the city.

But its effectiveness is in question as the forces do not fall under the governor’s authority.

As well as most of Taez, dissident troops also control a large swathe of the capital Sanaa, and there have been repeated deadly clashes with loyalist units, some of them commanded by Saleh relatives.

Yemen’s Gulf Arab neighbors and their U.S. ally hope the deal can reverse a drift toward chaos on the doorstep of the world’s top oil exporter, Saudi Arabia, and stop al-Qaeda’s Yemeni branch gaining a foothold near Red Sea shipping routes.

A completed transfer of power would make Saleh the fourth Arab ruler to be toppled by mass public protests that have reshaped the political landscape of theMiddle East this year.