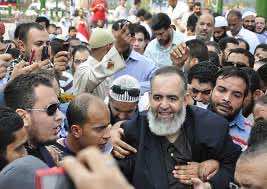 Islamist hardliners in Egypt, buoyed by their electoral success, are causing anxiety among liberals as they present their conservative vision for the country 10 months after its revolution.

The focus of much of the anguish among liberals is Hazem Abu Ismail, an independent candidate for the presidency who follows the ultra-conservative Salafi brand of Islam dominant inSaudi Arabia.

The main political party grouping together Salafi candidates, Al-Nur, is projected to sweep up to 20 percent of the vote from this week’s elections, making them the surprise success in the first phase of multi-stage polls.

Ismail, in a television interview broadcast on Thursday, declared that all Muslim women wanted to be veiled and that unmarried young men and women should not be seen together in public.

Mixed sex workplaces were “unacceptable,” he said, while the production and public consumption of alcohol should be banned.

Pointing to the expected strong showing of Islamist parties in tourist areas around the Red Sea popular with Western holidaymakers, he said voters had chosen them “to preserve their honour.”

Though he is seen as a marginal figure for the presidency, his views sent shockwaves through the liberal and secular community who hoped that February’s overthrow of 30-year dictator Hosni Mubarak would lead to new freedoms.

A Facebook group called “Say No to Hazem Abu Ismail” quickly appeared and Twitter was filled with comments from outraged Egyptians.

“Hazem Abu Ismail is a clown,” said one, adding that his views represented a large number of candidates in the Al-Nur party which may have won up to 25 percent in the voting on Monday and Tuesday.

Partial results were trickling out on Saturday, showing that Islamist parties who want to implement sharia law have won at least two thirds of votes already cast.

The dominant party is the Freedom and Justice Party of the Muslim Brotherhood, a more moderate political movement with decades of experience as a religious and charitable organisation.

The new hardline Islamist groups such as Al-Nur were formed only after the end of Mubarak’s rule, meaning they were able to win more than one in five votes with minimal organisation and campaigning.

Another fear figure among the Islamists is parliamentary candidate Abdel-Moneim El-Shahat, who this week accused the late Egyptian writer Naguib Mahfouz, a Nobel prize winner, of “inciting promiscuity, prostitution and atheism.”

In an interview on Thursday, the candidate from the conservative bastion and port city of Alexandria said that Mahfouz’s novels were “mostly set in areas involving brothels and drugs,” Al-Ahram newspaper reported.

“We’re on our way to becoming a new Afghanistan!” said one of many similar comments on Twitter from young revolutionaries who complained that their revolution had been hijacked.

Another added: “My beloved secular father didn’t get killed in jan25 revolution, for Egypt to vote for a man like Hazem Abu Ismail. No, No and1000x No!”

A spokesman for the Al-Nur party told AFP on Thursday that neither the country’s large Christian community nor liberal Muslims had anything to fear from his group, which he said would focus on improving all Egyptians’ lives.

“The results in these elections are the best response (to such fears), despite a campaign of fear-mongering and slander in the past 10 months. A large part of the public trusts us,” said Mohammed Nur.

He dismissed fears raised in the media that they might try to ban alcohol.

“Maybe 20,000 out of 80 million Egyptians drink alcohol,” he said. “Forty million don’t have sanitary water. Do you think that, in parliament, I’ll busy myself with people who don’t have water, or people who get drunk?”
Picture credit:  visionnews.com