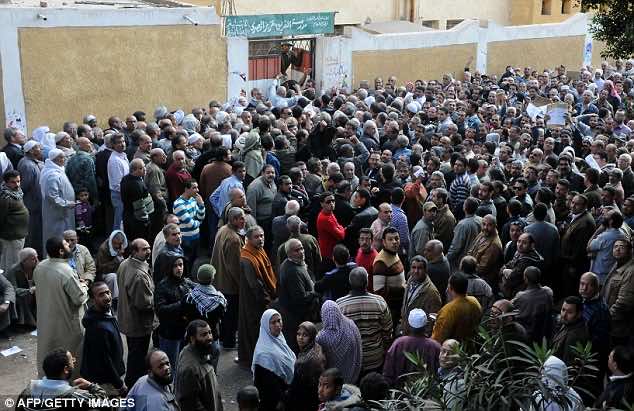 The Muslim Brotherhood, expected to win 40 percent of votes in the first phase of Egypt’s post-revolution election, stressed Saturday it was a moderate force, not to be confused with hardliners.

The Brotherhood’s Freedom and Justice Party is set to emerge as the dominant force in the country’s lower house of parliament for which voting began in a third of Egypt’s districts on Monday and Tuesday.
“The people have chosen candidates who represent their Islamic identity and who they have confidence in,” spokesman Mahmud Ghozlan told AFP.   “Fears about us are unfounded and have nothing to do with reality. We represent a sort of centrist, moderate Islamism. We won’t impose anything by force,” he added.

The group has already said it plans to align itself with a secular, liberal alliance in the new parliament, rather than hardline Salafi Islamists who are forecast to have won an unexpectedly high 20 percent of votes this week.

The showing by the Salafists, who advocate an ultra-conservative interpretation of Islam and Sharia law, was “higher than we expected,” he said. Partial results have been released, showing the Muslim Brotherhood as the leading new power centre, but full results are being held back without explanation by the election commission four days after voting ended. The prospect of an Islamist-dominated parliament has raised fears among liberals about civil liberties, religious freedom in a country with the Middle East’s largest Christian minority, and tolerance of multi-party democracy.
Israel is also set to be concerned by the rise of Islamist parties seen as hostile to a 1979 peace agreement between the neighbours.

The Freedom and Justice Party says it strives for a “civil state, defined as a non-military, non-religious state… that respects human rights,” according to its political programme.

Egypt’s current constitution, to be re-drawn by the new parliament once it  is fully elected by March next year, names Islam as the country’s official  religion and says it is a source of inspiration for legislation.