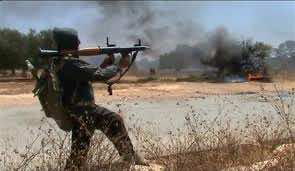 Libyan fighters who led the uprising that toppled Moamer Kadhafi were ordered on Saturday to steer clear of the border with Tunisia after complaints that Tunisians had come under attack.

“There was a meeting by Libyan border officials and it was decided to ask the (former) rebels to move back two kilometres (over one mile) from the (Ras Jdir) border,” said Colonel Mohamed Jarafa, a border official.

“The decision is expected to be implemented later today or early tomorrow. We don’t want this to be a problem between the two governments,” Jarafa said.

The measure came a day after Tunisia closed a second border post in Dehiba following allegations of attacks on Tunisians just inside the Libyan border.

The Ras Jdir crossing, 180 kilometres west of Tripoli, closed on Wednesday when Tunisian guards stopped work in protest at what they called a lack of protection against armed and unarmed Libyans.

A Libyan reportedly shot and wounded a Tunisian customs official as he forced his way across the border.

Such incidents have led to lengthy delays at the Ras Jdir border, with the queue sometimes stretching for kilometres.

Jarafa did not deny the incidents but played them down. “Some rebels are unaware of the consequences of their actions,” he said.

Tunisian authorities have repeatedly complained of the presence of many armed Libyans fighters around the coastal border post.

On Thursday, Tunis voiced its “deep concern” at the border incidents and called on Tripoli to manage its side of the crossing with professional forces.

On Saturday, Libyan fighters, mostly from the town of Zuwarah, remained in the border area, an AFP reporter at the scene said.

Regular blasts of gunfire could be heard and civilian pick-up trucks loaded with heavy artillery roamed the area.

The only traffic at the Ras Jdir crossing was Libyans entering from Tunisia, many returning after months of taking refuge from the war that brought down Kadhafi.

The border was closed to Libyans trying to cross into Tunisia.