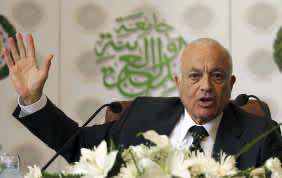 An Arab League ministerial committee handed down a travel ban on 19 Syrian officials to Arab states and has presented an ultimatium to Damascus to accept observers to monitor the unrest in the country.

Sheikh Hamad bin Jassim Al-Thani, the Qatari prime minister, announced the new deadline for Syria to avoid sanctions after a meeting in Doha to discuss the measures decided against Damascus over its crackdown on eight months of
protests.

“During the meeting we contacted Damascus… and we asked them to come tomorrow (to Doha) to sign” the protocol on sending observers to Damascus, said Jassim al Thani.

“We are waiting for a reply,” he said. “As Arabs we fear that if the situation continues things will get out of Arab control.”

The Arab League has also approved of cutting flights to Syria by 50 per cent.

The Arab League last Sunday approved sweeping sanctions against Assad’s government over the crackdown, the first time that the bloc has enforced such measures against one of its own members.

The vote on sanctions came after Damascus defied an earlier ultimatum to accept observers under an Arab League peace plan and put an end to the eight-month crackdown.

Syria’s Foreign Minister Walid Muallem said last month that the wording of the text to send observers undermined the country’s sovereignty because it “totally ignores the Syrian state, even coordination with the Syrian state.”

At least 25 people have died in fierce fighting between Syrian security forces and army rebels in northern Syria as violence intensified in the eighth month of unrest against President Bashar al-Assad’s government.

Opposition groups on Saturday said rebel forces are increasing their attacks on security forces loyal to the government, which are trying to suppress the revolt against 41 years of Assad family rule.

The UK-based Syrian Observatory for Human Rights said the fighting broke out around midnight in the northern city of Idlib, near the Turkish border.

“Seven were killed from the army and regime security forces, including an army officer,” the group said. “Three civilians and five defectors were also killed.”

Violence was also reported from the central city of Homs and the southern Deraa province by mid-day, the human rights group said.

In Homs, a hotbed of armed revolt against the military crackdown on protests, two men were shot dead, one by a sniper, the organisation said.

The group said security forces were also conducting raids in rural Deraa province, cradle of the anti-Assad movement. It said one civilian was killed and five were wounded during morning raids in the town of Tafas.

The United Nations’ top human rights forum on Friday had condemned Syria for “gross and systematic” violations by its forces, including executions and the imprisonment of some 14,000 people.

Syria condemned the UN vote on human rights violations by the country’s security forces as “unjust,” and said it was based on false information from the regime’s foes.

The UN Human Rights Council resolution passed in a vote on Friday was “unjust” and “prepared in advance by parties hostile to Syria,” the foreign ministry said in a statement carried by state news agency SANA.

Syrian authorities say they are fighting foreign-backed “terrorist groups” trying to spark civil war who have killed some 1,100 soldiers and police since March.

More than 4,000 people have died since protests broke out in March, according to the United Nations, which says the violence in Syria looks like civil war.