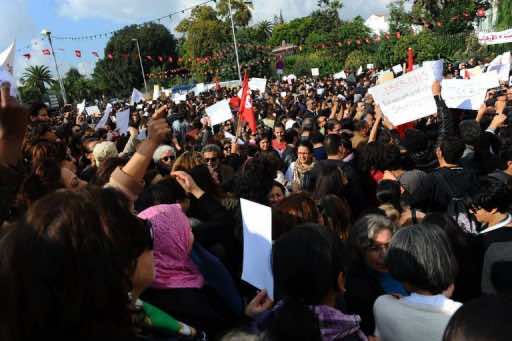 “The Islamists attacked us and threw stones, the police fired tear gas,” Ines Ben Othman, a representative of the liberal demonstrators told AFP.

“The sit-in continues, we will remain. But the aggressors are provoking us and are waiting on all street corners,” she added.

Interior ministry spokesman Hichem Meddeb confirmed that Islamists had “thrown stones and the police dispersed them. Calm has returned.”

Separated by barriers and police, the two sides shouted insults at each other outside the Bardo Palace where the constitution is being drawn up after a vote that saw the moderate Islamist Ennahda party win most seats on the drafting body.

The Islamists waved Ennahda flags but also the black banners of the hardline Salafist Hizb Tahrir, which has not been legalised in the north
African country.

Ennahda spokesman Noureddine Bhiri, whose party denied being behind the Islamist rally, went to try to calm the situation as police reinforcements and armored vehicles were brought in to block the entrance to the palace.

The constituent assembly also issued a statement appealing for calm and support as it charts the country’s future and sets the pace for the Arab Spring, a year after the birth of the revolution that brought about regime
change.

“Tunisia is going through a very sensitive phase where the priority is the establishment of a democratic regime and of a fair economic system. And this requires us to refrain from anything that could stir tensions and instability,” the statement said.

Hundreds of students, teachers, unemployed miners and other protesters began gathering Wednesday at the Bardo Palace with various demands.

The protest was partly a response to ongoing demonstrations at a university outside the capital, where Islamists disrupted courses demanding a stop to mixed-sex classes and for female students to wear the full-face veil, or niqab.

Long-time Tunisian leader Zine el Abidine Ben Ali and his staunchly secular regime were ousted in a popular uprising in January and the country has no government yet, while the economic situation is worsening.

Central bank governor Mustapha Kamel Nabli was quoted by the TAP news agency Saturday as saying that growth this year will be zero while unemployment will be up to 18 percent.

The vital tourist sector has been hard hit by the revolution, with foreign visitors preferring to go elsewhere, while the phosphate industry has seen production plummet because of a series of strikes.

In addition some 100,000 Tunisians working in neighbouring Libya fled back home during the upheaval that overthrew Moamer Kadhafi’s regime and are left without job.

The central bank Friday demanded that its independence be guaranteed in the new onstitution, as a draft law threatened to place it under government control.

Ennahda, with 89 seats in the constituent assembly, is accused by some, including prospective coalition partners, of seeking to concentrate all powers in the hands of the new prime minister, the party’s number two Hamadi Jebali.

The assembly is due to vote in the next few days on a power-sharing deal which would make left-winger Moncef Marzouki the country’s next president.

Some Tunisians were increasingly unnerved by the country institutional limbo, with talks for a new executive dragging on and the former interim administration led by Beji Caid Essebsi having already resigned.

“It’s urgent, we can’t wait any longer. There’s a climate of hesitation and indecisiveness, nobody is making decisions, it’s crippling the economy,” said
Hichem Elloumi, a representative of the country’s employers association.