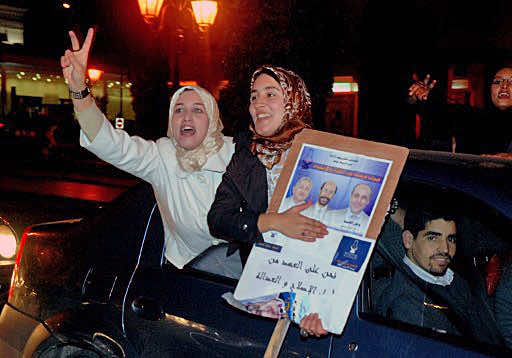 King Mohammed VI this week appointed Morocco’s first-ever Islamist prime minister, but that was not the only change to the country’s political landscape.

It is no longer “business as usual” for politicians in the kingdom. The poll that swept Abdelilah Benkirane and his moderate Islamist Justice and Development Party (PJD) into power marked a rejection of the long-standing political culture.

“If we surveyed the opinions of voters about why they voted heavily voted for the PJD, the answers would be vague,” Zentari says. “However, we will find that the religious values on which the party focused, its political virginity – in that it never before shouldered government responsibilities – and that its members were never involved in corruption cases, topped the factors that swayed voters.”

“It’s fair to say that we’re faced with a milestone that can form a new culture in electoral behaviour,” he says. “Now there is voting for party institutions rather than individuals or dignitaries, as was the case in the past.”

Zentari believes that Morocco is seeing a restructuring of what he calls the “forced polarity in the political field” imposed by election results and the pressures of voter trends.

During the recent parliamentary election, the field included the opposition PJD, the Authenticity and Modernity Party (PAM) alliance, the liberal National Rally of Independents (RNI), the independent Istiqlal, the Socialist Union of Popular Forces (USFP), the Progress and Socialism Party (PPS) and other parties.

“We expected that PJD would score a massive victory in this election, but not to this degree,” says Mohamed Tozy, who runs the Moroccan Centre for Social Research. Tozy concedes that the PJD presented candidates with attractive profiles: “highly-educated professionals and university professors”.

As to why the PJD outperformed its competitors, “many voters voted for the party as some sort of punishment against the current government”, he tells Magharebia.

“Results scored by such government parties were poor, especially the three Democratic Bloc parties which couldn’t collectively exceed the number of seats that PJD alone won,” he notes.

Many middle-class urban voters may also have cast their ballots for the PJD out of a desire for change after traditional parties let them down, Tozy posits.

A big surprise came from the new Authenticity and Modernity Party (PAM). The party founded by Fouad Ali El Himma (known in the Moroccan press as the “King’s Friend”) was considered a strong contender to lead the next government. Instead, it won just 11.9% of the seats. Analysts say the party’s popularity was affected by criticisms levelled against it by the February 20 Movement.

Its ally, the National Rally of Independents (RNI), fared better. Its share of parliamentary seats rose to 13.2% from 12%.

Except for the RNI, Moroccan parties were negatively affected by the strong rise of the PJD and the polarisation of PAM. The National Democratic Party (PND) failed to win a single seat, after holding 14 seats in the previous parliament. Following this election, PND Secretary-General Abdallah Kadri said he would retire.

Data on the number of votes won by each party is expected to reveal big surprises.

When the interior ministry releases the total vote tally, analysts will have a more accurate picture of the political map and the real size of each party’s electoral base. Researchers believe that the data released thus far, which is related only to the number of seats won, doesn’t reflect the real popular weight of each party.

Despite the clear PJD win, political observers say the Islamist party will face huge difficulties in forming a government. The “voting by list” system doesn’t allow any party, regardless of election results, to get more than 30% of parliamentary seats. The PJD could win the majority that enables it to form a government without needing to enter into alliances with other parties.

“We’re about to establish new democratic traditions in the wake of the demands for change that were expressed by the people through protests, and after the constitutional and political reforms that were introduced to meet these demands,” Tozy said.

“We now need to form a strong and coherent government, especially as the next government will have a special nature, given that it is a constituent government,” he added.

The incoming leadership will have to enact more than 20 regulatory laws, including those governing institutions created under the new constitution, such as the Constitutional Council and the National Security Council. This is in addition to the laws that govern relations between the government council, which is headed by the Prime Minister, and the Cabinet of Ministers, which is headed by the King.

Because of the way election results are distributed, the options for PJD to form a government are still limited. The party plans to give priority to the three Democratic Bloc parties. Indeed, one day after his official appointment, Prime Minister Benkirane said that he had already begun talks to form a government coalition.

Analysts expect that the party will face several problems. Internal conflicts in the USFP cast doubts over the possible participation of the party, which is due to hold a meeting of its national assembly to take a decision about its participation in the government.

PJD leaders did not rule out the possibility of involving the Popular Movement (MP) if an agreement cannot be reached with the USFP.

Then there’s the issue of the winning party’s pledges to the electorate.

“PJD Secretary-General Abdelilah Benkirane will face a great difficulty in honouring the promise that he made after he was named as head of government, which is to reduce the number of ministers in his next government to twenty,” said analyst Mohammed Manar.

“Negotiating with four or five parties to form a parliamentary majority will force him to increase the number of portfolios to be able to satisfy everyone,” he said.