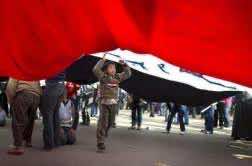 Partial figures trickled in for the areas of the country that voted in record numbers on Monday and Tuesday, confirming earlier predictions that Islamist parties would win at least two thirds of ballots cast.

State newspapers reported on Sunday that the Muslim Brotherhood’s new Freedom and Justice Party (FJP) received roughly 40 percent of the vote and the main Salafist Al-Nur party between 20 and 25 percent.

Prime minister-designate Kamal el-Ganzuri, meanwhile, voiced hope that his new government would be sworn in by Wednesday, the official news agency MENA reported.

Ganzuri, 78, expected to end his consultations on the government line-up on Sunday. He said he decided to delay the announcement of the line-up, expected last Wednesday or Thursday, because of nomination changes, MENA added.

“The people have chosen candidates who represent their Islamic identity and who they have confidence in,” said Mahmud Ghozlan, a spokesman for the Brotherhood, which expects to win 40 percent of the vote overall.

He stressed that the FJP was distinct from the Salafists, who he said had won a surprising success in the polls.

“We hope that people make a difference between different movements and don’t put all Islamists in the same basket,” he added.
Full results after the first round — which saw 62 percent turnout — were initially meant to have been published on Wednesday but were held back by the electoral commission.

There appeared few bright spots for the liberal secular movement which played a key role in the overthrow of the 30-year rule of president Hosni Mubarak in February after an 18-day uprising.

It has splintered and been overshadowed by the more organised Brotherhood, which is well known to Egyptians because of its decades of opposition to the Mubarak regime and its extensive charitable and social work.

Mohammed Abdel Ghani, a liberal candidate, told the independent Al-Shorouq newspaper that his movement needed to counter propaganda that “non-Islamist candidates were infidels.”

In Cairo, the rising star of the movement, Amr Hemzawi, won a seat in the upmarket Heliopolis district, but elsewhere leading figures of the revolution were either struggling or were beaten.

In Tahrir Square, the epicentre of protests against Mubarak, demonstrators returned last week to protest against the military rulers who took over when the strongman quit, but their numbers dwindled to a few hundred on Saturday.

“Everyone that we had faith in has betrayed us,” 25-year-old protester Mohammed El-Assas told AFP.

According to independent daily Al-Masry Al-Youm, no women were elected in the first round.

One of them, Nihal Aahdi, told the paper it was because “religious parties dominate Egyptian society and the Muslim Brotherhood and Salafists dominated the results.”

It was only the opening phase of a parliamentary election that is taking place in three stages, but the returns reveal the political trends that will shape the country’s transition to democracy.

For the lower house of parliament, the rest of the country will vote in a further two stages later this month and in January. An upper house will then be elected in another three stages.

Voters are required to pass three votes for the new lower house: two for individual candidates and one for a party or coalition.

All but four of the individual contests in this week’s election will go into a run-off scheduled for Monday because no candidate gained an outright majority.

The Brotherhood and other political parties are expected to face a fierce power struggle for control with the army which took over when Mubarak stepped down.

Their rise is also expected to raise fears in Israel, which shares a border with Egypt and a peace agreement signed in 1979.

Israeli Defence Minister Ehud Barak on Saturday expressed deep concern over the trend from the first round of voting.

“The process of Islamisation in Arab countries is very worrying,” Barak said on Israeli television. adding however that it was “premature to say how these changes will affect the region.”

In contrast, the Palestinian Islamist movement Hamas, which enjoyed a landslide win in 2006 parliamentary elections, said the success of Islamist parties in Egypt was a “a very good result.”