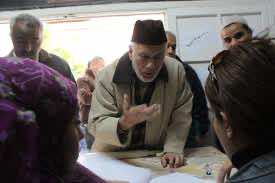 Islamist parties have won 65 percent of votes for party list seats in the first round of parliamentary elections, according to official figures obtained by AFP on Sunday.

The moderate Muslim Brotherhood won 36.62 percent of the vote, followed by the hardline Salafist Al-Nur party with 24.36 and the moderate Al-Wasat with 4.27, according to a chart provided by elections committee secretary general Yusri Abdel Karim.

Abdel Karim said that the committee would not provide percentages until the end of voting on January 10, but according to an official chart he provided the Muslim Brotherhood’s Freedom and Justice Party list won 3.56 million out of 9.73 million valid ballots.

The percentages cannot be calculated into the number of seats each party list will receive until the final results for the whole country are in.