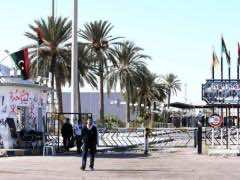 Tripoli said on Sunday it was drafting a plan to reopen and secure its border with Tunisia, as Libyans returning from the neighbouring country accused Tunisians of attacking and robbing them there.

Meanwhile, the former rebels who toppled Moamer Kadhafi’s regime showed a willingness to keep clear of the troubled Ras Jdir border post after Tunisia closed the frontier there on Wednesday.

The crossing, 180 kilometres(115 miles) west of Tripoli, was closed after Tunisian guards stopped work, complaining of the lack of protection against armed and unarmed fighters deployed on the Libyan side.

On Friday, Tunisiaclosed a second border post in Dehiba after allegations of attacks on Tunisians inside Libya, and Tunis Air flights to Libya have also been cancelled since last week.

Libya’s Deputy Prime Minister Mustafa Abu Shagur said on Sunday the interior and defence ministries were “preparing a plan to reopen and secure the border.”

“In the next two days the situation will change,” he told reporters in the capital.

He said only those fighters attached to the two ministries “will secure the border, and the customs department will be responsible for border traffic.”

On Saturday, a Libyan border official told an AFP reporter at Ras Jdir that the former rebels had been ordered to keep away from the border.

“There was a meeting by Libyan border officials and it was decided to ask the rebels to move back two kilometres (over one mile) from the (Ras Jdir) border,” Colonel Mohamed Jarafa said.

“The decision is expected to be implemented later today or early tomorrow.

We don’t want this to be a problem between the two governments,” Jarafa said.
Tension between Tunisand Tripolierupted after a Libyan rebel reportedly shot and wounded a Tunisian customs official as he forced his way across the border.

Tunisia closed the Ras Jdir and Dehiba crossings after the incident.

Voicing “deep concern,” it also called on Tripoli to manage its side of the border with professional forces.

But on Saturday, Libyans returning from Tunisia through Ras Jdir complained of running a Tunisian gauntlet on their way home, often being forced to drive through unknown terrain to avoid being set upon and robbed.

“Around 10 people stopped my car near the Tunisian city of Madnin and robbed me and my friends,” Suleiman Zahra, a businessman from Tripoli told an AFP correspondent at the border post.

“They threw stones at my car and shouted abuse at us. It was a nightmare as I was bringing back a friend who was treated in Tunisia after having been wounded in the fighting” that ousted Kadhafi.
The only traffic at Ras Jdir on Saturday was Libyans returning from Tunisia, many after months of taking refuge there from the war. The border was closed to Libyans trying to enter Tunisia.

Apart from returning Libyans, only armed former Libyan rebels in their cars and pick-up trucks were moving around the crossing which usually sees thousands of people move between the two countries every day.

Fighters, mostly from the town of Zuwarah, remained in the border area as regular shots were heard and civilian pick-ups bearing heavy artillery roamed the area.

A Libyan border official, Najmi Moamer, said the former insurgents had been helping to man the borders for several months by checking passports and car registration documents.

Fighters who spoke to AFP said they were ready to move away from the border but wanted Tunis to open the crossing.

“We have no problem to move back and we took up arms only to liberate our country,” said fighter Nader Mansur from Zuwarah. But Tunisia “must open the border” and stop attacks on returning Libyans.

“They are attacking our people and we know who these attackers are. They are Tunisians paid by loyalists of Kadhafi who escaped to Tunisia during the early days of the revolution.”

Libyan businessman Osama Mohammed Hassan said he spent a night at a farm in Tunisia with his wife, mother and brother, before reaching the border crossing.

“They (Tunisian men) are drunk and are attacking any Libyan vehicle they see. My car was also hit between Madnin and Ben Gerden,” another Tunisian city, he said.

“We treat Tunisians like our brothers. They are the only ones allowed to visit Libya without visas and still they treat us like this.”