Morocco World News
Home Z-Headlines New Government in Morocco: The USFP Out of the Coalition 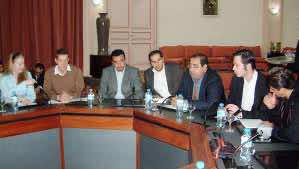 The Popular Union of Socialist Forces will not participate in the next government headed by the Party of Justice and Development’ s Secretary General, Abdelilah Benkirane.

In a phone call with the Maghreb Arab Press news agency, Driss Lachgar, member of the politburo of the USFP and outgoing Minister of Relations with Parliament, said that the participation of his party in the upcoming government is ruled out. This recommendation, which was made by the politburo of the party during his meeting on Sunday in Rabat, has been submitted to the its national council and was “welcomed by all the participants in the national council’ meeting,”, Lachgar said.

In a televised interview with 2M TV channel, Lashgar said that “our program, our ideology and our political militancy are not compatible with the orientations and the program of the new government”.

“By joining the opposition, our political party will contribute to developing the country’s democracy,” he added.

Soon after the announcement of the final results of the elections last Sunday, Benkirane asked the parties of the Koutla, composed of the Itsiqlal party, the USFP and the PPS to join his coalition government.

Before the declaration of Mr. Lachgar to the MAP, several Islamist leaders have warned against any Benkirane alliance with the Socialists. They still speak of how Lachgar Driss, had used the PJD during the elections in 2009. Initially, he called for an alliance in all cities between the PJD and the USFP. But as soon as the USFP was invited to join the government, he broke it off.

Another reason for Benkirane’s caution towards the Socialists is due to their ideological and doctrinal differences. Both parties are polar opposites with each other regarding their visions for society. They are often violently opposed on very sensitive issues such as the role of women in society, secularism, or the penal code.

It remains unclear now if the PPS will follow suit or it will join the PJD in forming a coalition government.

On Friday, the newly appointed head of government, Abdelilah Benkirane, held talks with leader of the Progress and Socialism Party (PPS), Nabil Benabdallah.

In a statement broadcasted by Moroccan TV channel “Al Oula”, Benkirane said the meeting focused on the possibility of the PPS participation in the next government.

He hoped to reach an agreement with the PPS in order to form a “strong and coherent” government, hailing the role that this party plays in the national political landscape.

Benadallah, for his part, said he exchanged with Benkirane points of view about his party’s possible participation in the next government.

He added that the two sides agreed to continue their consultations in order to reach an agreement for the benefit of Morocco’s supreme interests.