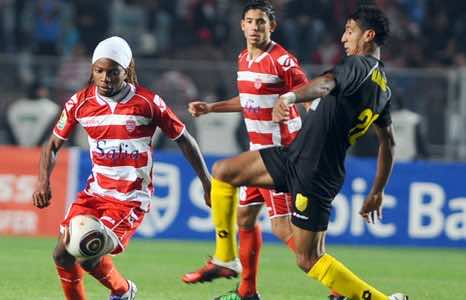 Tunisian side, Club Africain take a thin one goal advantage to the Complex Sportif de Fez in Fez on Sunday as guests of Moroccan side, MAS in the second leg final of the 2011 Orange CAF Confederation Cup.

The stakes are high and MAS, a team with no rich tradition in the continental club football will seek to overturn the books and ink their name in the history books of the second-tier continental club championship.

The Moroccans lost a by a lone goal in the first leg in Rades a fortnight ago, but left their opponents with so much to worry despite finishing the game with a man-less. MAS take enough consolation from their modest outing in their journey in a competition that nobody gave them a dog’s chance to reach the ultimate hurdle.

Last year, FUS Rabat, were the underdogs before pulling a fast one on twice-winners CS Sfaxien of Tunisia to snatch the title. The Moroccans have been impregnable at home with a proud record of scoring at least a goal at their favorite grounds.

MAS coach Rachid Taoussi insists the game is far from over despite the pedigree of their Tunisian guests in the continental club campaign and their first leg advantage.

“The final is played in two halves, the first is over and we will play the second halve at home. We will do our best to turn the tables and celebrate the title with our fans. I am sure we will do our best in the return encounter,” Taoussi said.

The Moroccans will be without defender Samir Zekroumi, who was sent off in the previous clash but Taoussi is optimistic he has equally good replacements to fill the void.

In Faouzi Benzarti, Club Africain have a technical guide who knows the in and out of African club football after successes with Esperance (1994 CAF Champions League) and Etoile du Sahel (2006 CAF Confederation Cup).

The 61-year old Benzarti will become the first man to guide two different clubs to the second tier continental club championship and is no mood to allow MAS to spoil his personal glory and that of his club as well.

“The players are aware of the challenge and we will do our best to win the continental title.

“We have a good defense, but that it is not say we are just going to defend. We will try to find the best balance between the defensive line and offensive to surprise our opponents,” Benzarti told the local media prior to his team’s departure for Fez.

At stake is a monetary-prize of $660,000 and a ticket to face the winner of the CAF Champions League in next year’s CAF Super Cup.