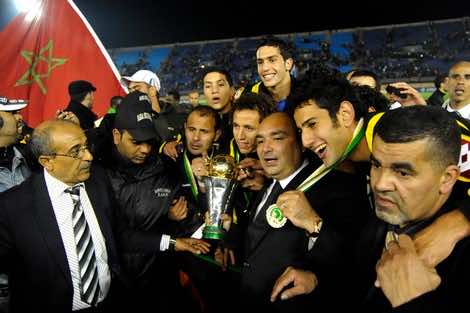 Morocco’s Maghreb Fez defeated Tunisian giants Club Africain in a penalty shootout to win the 2011 Caf Confederation Cup after the aggregate ended in a stalemate on Sunday.

Moroccan club Maghreb Fez have won the 2011 Caf Confederation Cup after knocking out Tunisia’s Club Africain with a 6-5 penalty shootout victory following a 1-1 aggregate at the end of the return leg final played in Fes on Sunday.

Club Africain were hoping to consolidate their slim lead by humbling their hosts or holding them to a goalless draw, but the Yellow and Blacks entered the fray launching a high-strung onslaught that lasted across the two halves, which forced the visitors to remain mostly in their own half.

Club Africain goalkeeper Aymen Ben Ayoub thwarted most of Maghreb’s goal efforts in the first half, including Senegal’s 19-year-old midfielder Mohamed Diop’s excellent shot, which hit under the cross bar and seemed to bounce off the goal line, but a closer look at the replay showed that the ball crossed the line.

Maghreb’s unfaltering offensive paid off in first half added time when Malian import Moussa Tigana’s volley found the back of the net after a close duel between Ben Ayoub and a striker released a low flying ball.

Club Africain had their situation compounded in the second half when Chad international Ezechiel Ndouassel was sent off following a foul on a Moroccan player. The hosts stepped up the pressure thereafter, but failed to scramble a winner which would have put the game to bed.

After a perfect 5-5 in the penalty shootout, Club Africain fluffed their sixth kick while Maghreb Fez pulled theirs off to ink their name in the history books in the second-tier continental club championship.

They go home with a monetary-prize of $660,000 (€492,000) and a ticket to face Caf Champions League winners Esperance Tunis in the Super Cup slated for February 26 in Rades.