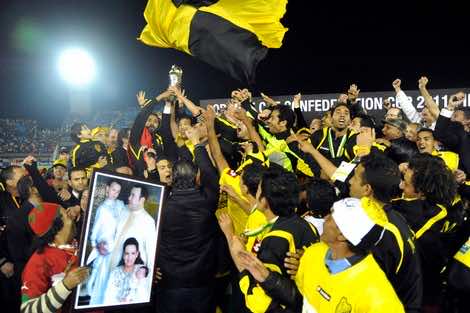 Following their heroic game on Sunday, King Mohammed VI sent a congratulations letter to the members of the Maghreb Sportive Association of Fez on the occasion of winning the title of the African Confederation Cup in its eighth session.

King Mohammed VI described the club’s achievement as “a deserved victory, with which your team proved its strong presence in the African football scene, contributing to Morocco’s shining football reputation, regionally and continentally.”

In this letter, the King praised all those who contributed in the preparation “to win this great continental title, and add it to the Moroccan golden record of titles, either at the national team level, or among the various Moroccan clubs that won African titles, embodying the pioneering position of Moroccan football in the continent”.

He especially commended the players as well as “the experienced coach of the team, its technical and administrative staff and its fans and supporters wherever they are.”

He went on to say that he joins the members of Maghreb Sportive Association of Fez (MAS) in their happiness while celebrating this great victory, wishing them more success.

MAS won the 2011 CAF Confederation Cup after defeating Tunisia’s Club Africain in a 6-5 penalty shootout, following a 1-1 aggregate at the end of the return leg final, which was played in Fez on Sunday December 4, 2011.

MAS became the fifth Moroccan club to win the CAF Confederation Cup after the Kawkab of Marrakesh, Raja of Casablanca, FAR o and FUS of Rabat.

MAS goalkeeper Anas Zniti was the hero as he saved two Club Africain spot kicks before stepping up himself to score the seventh and winning penalty.

Morocco’s MAS will meet Esperance of Tunisia, winner of the African Champions League , in the African Super Cup next season.