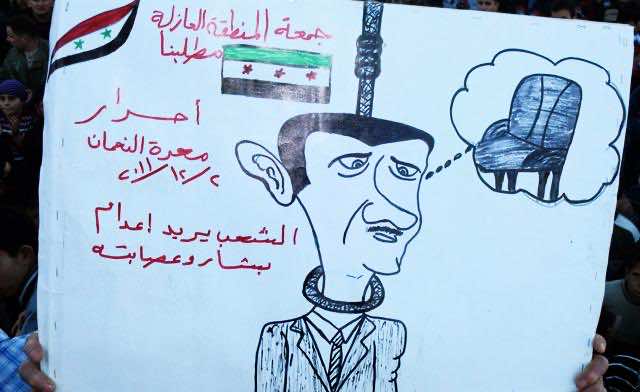 The United States and Turkey are reviewing how to help Syria if pro-democracy protests drive President Basher al-Assad from power, as Hamas was reported to have scaled back its presence in Damascus.

U.S. Vice President Joe Biden said on Sunday that the two allies have not discussed concrete “next steps.”

Washington and Ankara have both called for Assad to go, but worry it could deepen instability in a region already rocked by the Arab Spring, especially as U.S. troops leave Iraq by the end of the month.

Biden, in an interview with reporters travelling with him to Athens from Istanbul, said the collapse of the Assad regime would not necessarily spark a wider regional sectarian conflict, which some see pitting the Sunni-dominated west of neighboring Iraq against Shiites in that country and in Iran.

“There was a sense in our discussions that it would be able to be handled without any conflagration going beyond Syria, and that it could be localized to Syria,” said Biden, characterizing his meeting with Turkish Prime Minister Tayyip Erdogan on Saturday, according to Reuters.

Turkey has joined the Arab League in slapping tough sanctions on Syria, once a close friend, in response to Assad’s bloody crackdown on protests, and has talked openly about the need to be ready for any scenario, including setting up a buffer zone to contain any mass influx of refugees.

France has separately talked about a “humanitarian corridor” to help civilians caught in the violence that has killed more than 4,000 people, according to the U.N. estimates.

Biden, speaking to reporters in his private cabin on Air Force Two, said the issue of a buffer zone had not come up in his two-hour meeting with Erdogan.

“To the extent we talked about any ‘what-next’ steps, there were generic discussions about having to go in and provide some help and possibly economic assistance and stability, not militarily, but helping the Syrians,” Biden said. “We’re in this to see Assad come down and then determine what would be the most helpful thing for the international community to do to establish stability in that country.”

Biden’s eight day trip began in Iraq, and he spent much of his time with Erdogan and Turkish President Abdullah Gul, whom he met the day before in Ankara, talking about the country’s future after U.S. troops have pulled out. Biden said his main message was to emphasize that although the American war in Iraq was over, the United States remained engaged.

Washington and Ankara have kept in close touch over Syria but differ in their approach to Iran. Washington wants Ankara to adopt tougher sanctions against Tehran, but that is hard for the Turks, who get about 30 percent of their imported oil from Iran. Biden said the United States and Turkey might disagree “tactically” about sanctions on Iran, but shared the same strategic goal.

“The United States is going to maintain its leadership role in the entire region, from Iraq to Iran, to the Arab Spring, and it just makes sense we coordinate as closely as we can with our friends and allies who have the same overall strategic interests we have,” he said.

Meanwhile, dozens of Hamas operatives have quietly returned to Gaza from Damascus as the Islamist group scales back its presence in Syria and gauges the uncertain future of President Assad, diplomats said on Sunday.

Officially, Hamas leaders are sticking to their denial they plan to quit the Syrian capital, where the group keeps its main headquarters outside the Gaza Strip.

But diplomats and regional sources said the Hamas delegation in Damascus, which once numbered hundreds of Palestinian officials and their relatives, had shrunk to a few dozen.

Departures were speeded up, one regional intelligence source said, by the Arab League’s suspension of Syria last month over its military crackdown on protests rocking the Assad government.

Diplomats said dozens of Hamas operatives and their families, who had lived in Syria since the 1990s, and others who moved there in recent years have returned to Gaza via Egypt in recent weeks.

Hamas would keep a skeletal presence in Syria to “book a seat in a post-Assad era,” one diplomat said.

“Meanwhile, Hamas officials are on planes most of the time, bolstering ties with other countries like Egypt, Qatar, Turkey, Sudan, or in contact to explore new bases and not a sole base,” the diplomat added.

Asking not to be identified, the diplomat said: “Hamas will pull out of Syria in the right time but not for good.”

When asked about Hamas’s presence in Damascus, Sami Abu Zuhri, a Hamas spokesman said: “There is no change.”

In Beirut on Friday, a Hamas representative said the group was “still committed to supporting Assad.”

But, one intelligence source said, although Hamas “owes Syria a lot for its support, it doesn’t want to be on the wrong side of pan-Arab public opinion.”

Angering Syria, Hamas has refused to hold rallies in Palestinian refugee camps in support of the Assad government, which has sunk deeper into international isolation.

Tensions with Damascus rose further when Hamas opted not to sign a statement by nine other Palestinian groups, including President Mahmoud Abbas’s Palestine Liberation Organization, in support of the Syrian leader.

Hamas, which Israel and many Western powers consider a terrorist group, won a 2006 Palestinian election and, a year later, seized the Gaza Strip following a schism with its secular rival, Fatah.