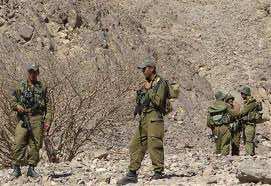 Israeli troops were on very high alert along the southern border with the Egyptian Sinai on Monday over fears a cell of gunmen had crossed the border into southernIsrael, a security source told AFP.

The state of alert was based on “intelligence information about a cell of terrorists planning an attack” on a road which runs close to the border in the southern Negev desert, the source said.
The alert has been in place since Saturday, when the military contacted their Egyptian counterparts to pass on the information they had, he said.

The Israeli army had no immediate comment on the state of alert, saying only that the military “deploys its troops in accordance with ongoing security assessments.”

An education ministry spokeswoman said school parties had been “reminded not to go to the border area” in compliance with an order which was put in place following a deadly cross-border attack in the area in August.

During that attack, gunmen infiltrated southern Israelfrom Sinai and carried out a coordinated series of shooting ambushes on buses and cars on route 12, which runs along the Egyptian border some 20 kilometres (12 miles) north of the Red Sea resort of Eilat.