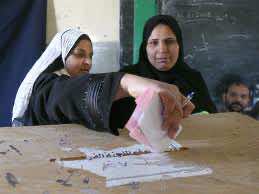 It’s been around for only six months  but is already in second position: Egypt’s main hardline Islamist party is  thrilled with its strong showing in the country’s first post-Mubarak election.

In the gritty port of Alexandria, Egypt’s second-biggest city, the Al-Nur  party was competing Monday in run-off elections in the first of the country’s  multi-stage polls, buoyed by its already impressive returns.

It won a quarter of all votes cast for parties in the first round of  multi-stage polls for a new lower house of parliament and has another 26  individual candidates standing for 52 seats up for grabs on Monday.

“The ones with faith in God, they’re the ones that are victorious,” said Jihane, a 45-year-old activist dressed in a black niqab veil that covered all  of her except for her eyes, quoting from the Muslim holy book the Koran.

“It’s only been 10 months that we’re in politics and we are already  second,” she told AFP as she distributed pamphlets for the Salafist party,  which advocates a fundamentalist interpretation of Islam.
Salafists began organising immediately after the fall of Hosni Mubarak in  February and founded the Al-Nur party in June.

The success of Al-Nur has sent a shockwave through Egyptian politics, shaking up the old order in which the fundamentalist but more moderate Muslim Brotherhood had the monopoly on Islamist politics

The Brotherhood, banned for decades under Mubarak, came first in the initial polls, winning 36.6 percent, but with Al-Nur only slightly behind with 24.4 percent.

In the conservative stronghold of Alexandria, the run-offs were all between  candidates from Al-Nur and the Brotherhood’s Freedom and Justice Party (FJP).

“You can have confidence in a party that succeeds in getting to where  Al-Nur is now in so short a time,” said 24-year-old voter Shaima.

But some have doubts about the brand of Islam practised by Salafi followers who favour a literal reading of the Koran and favour strict segregation of the sexes, the full veiling of women and a ban on alcohol.

Salwa Silmi says she’ll vote for the Brotherhood “because they have a history and political experience unlike Al-Nur.”

“Before, the Salafists said that democracy was ‘haram’ (forbidden by Islam) but now all of a sudden apparently it isn’t,” she said.

Only a third of districts have voted so far in Egypt. The rest of the country, including some of the most conservative smaller towns and rural areas, goes to polls later this month and in January.

In Alexandria, as one activist says, the fierce competition between Islamists is ultimately positive for the movement.

“In the end, we will all be winners. It will obviously be an Islamist who will win and that is the most important thing,” he said.

The head of Al-Nur, Emad al-Din Abdel Ghaffour, told AFP on Sunday that the party had been a success because it had “worked most on the ground and brought up issues such as education and the economy.”

He credited a strong grassroots campaign for his party’s surprise showing despite a “campaign of defamation” and stressed that the party would not discriminate against women or the country’s estimated eight million Christians.