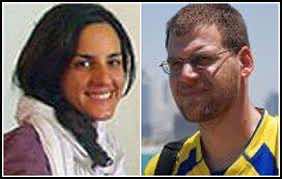 Six weeks after the kidnapping of three European aid workers in the Tindouf camps, in Algeria, the Mauritanian authorities announced today the arrest of three individuals involved in this operation, two of whom are believed to be from the Polisario.

According to Spanish radio station Cadena Ser, the two suspects from Tindouf were arrested after they had been followed by the Mauritanian secret services, who were closely watching their activities for 12 days since they settled in an apartment located in one of the popular neighborhoods of the Mauritanian city of Nouadhibou, situated on the coast north of Nouakchott. They had entered Mauritanian soil after they participated in the kidnapping.

The two individuals from Tindouf, Mamina Laaguir Abdelaziz Ahmed Baba, 29, and Aghdafna Mohamed Hamadi Ahmed Baba, 32 are believed to have been directly involved in the kidnapping of two Spaniards and one Italian, who were working for NGO’s that provide humanitarian aide to the population living in the camps.

Since the kidnapping took place, it has not been claimed by any organization, although all indices point to the implication of Al Qaeda in Islamic Maghreb (AQIM).

The three European nationals, two Spaniards and one Italian, were abducted last October in the camp of Rabouni near the southwestern Algerian city of Tindouf.

The abduction took place at midnight on October 22, when the aid workers were resting.

Ainhoa Fernandez del Ricon is a member of the Extremadura-based Association of Friends of the Saharawi people, while Gonyalons works for the Basque-based NGO Mundubat Basque. For its part, the Italian Rosella Urru works in the Italian Cooperation Committee for the Liberation of Peoples and had started working in the Tindouf camps three years ago.

International experts who took part in the Medays Forum, held in the Moroccan city of Tangier last November,  warned of the serious threats posed by the mounting armed violence to peace and security in the region of the Sahel and the Sahara.

Director of the Paris-based Observatory of Geopolitical Studies (OEG), Charles Saint Prot, noted that zones that are not under the authority fo states offer foothold for terrorist networks and all sorts of trafficking.

In this respect, Saint Prot pointed to the threat to regional peace and security posed by the activities of Al-Qaeda in the Islamic Maghreb (AQIM) and the Polisario separatists, recalling the recent kidnapping of three European aid workers in the camps of Tindouf and the rise of drug trafficking networks.