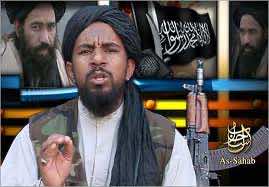 Senior Al-Qaeda militant Abu Yahya al-Libi urged Libyans who defeated the regime of Moamer Kadhafi to hold on to their weapons and implement sharia law, in a video released Monday.

In the October 29 video, Libi praised Libyan rebels for the fall of Kadhafi’s “ruined regime,” urging them not to heed Western calls to put down their weapons, the US-based SITE Intelligence Group said.

“Abandoning the weapons that were one of the reasons of your liberation from a deadly slavery that lasted for more than four decades during which Kadhafi was torturing you severely, means simply returning to slavery in a new garment and surrendering to arrogant tyrants, domestic or foreign, who will rob you of your will and control your freedom,” he said, according to a SITE translation.
Libi noted that in America weapons are sold “like watermelons,” and
Americans consider possessing weapons an untouchable right.  “Why does America and her sisters from among the Western countries seek to prevent and deprive our people from this right, which our Islamic religion granted us before America and its laws existed?”

Libi, who himself is Libyan but whose whereabouts are unknown, was shown wearing a black turban and white robe against a red background.

He urged Libyans to use their weapons to “defend their religion, lives, honor, and money under the limitations of the sharia.”

“At this crossroads you have found yourselves, you either choose a secular regime that pleases the greedy crocodiles of the West and for them to use itas a means to fulfill their goals, or you take a strong position and establish the religion of Allah,” he said.

Interim Libyan leader Mustafa Abdel Jalil has said that sharia would be Libya’s principal law, triggering international criticism and calls for restraint amid fears that the Arab Spring may give rise to intolerant and violent militants.