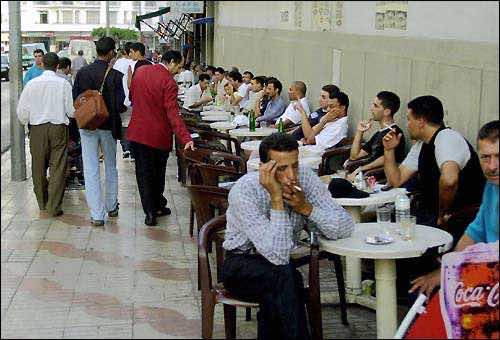 A new sub-culture has emerged in Moroccan society, particularly among young people. People without jobs, or without full time work, call what they do for living ‘Bricolage’, the French term for “do it yourself.”  In Moroccan society, Bricolage is often easy handiwork that doesn’t require much time. Bricolage means the ability to use whatever materials are at hand, regardless of their original purpose, to accomplish a job,and this job can usually be done by anyone, regardless of experiences or skills.

This new phenomenon is caused by a lack of job opportunities. People engaged in this culture are mostly jobless, young and often students. Young people in Morocco are forced to do whatever work comes their way because full time jobs are limited, even for people with advanced degrees.

Kamal, a university student, stated: “I do whatever comes my way to support myself and sometime my family. I have no government sponsored financial aid. It is very difficult to pursue studies in a country like Morocco, which has so little money. Plus, Moroccan universities do not offer part time classes and students are expected to go every day to the university [making it difficult to work].”

“I bricole,” said Abd Alghani, who has a university degree in finance, “because I don’t want a job that does not suit my skills and ambitions. I bricole, and from time to time apply for jobs appropriate for me,”

The large number of cafes in the country of Morocco seem to charm people into spending much of their time chatting and watching sport matches. The many Moroccan cafes are crowded with customers, even during working hours. Moroccans visit cafes frequently because they know that whenever they go, they will find something interesting, either watching a sports match or listening to news, or just chatting and staring at pretty girls. Al Jazeera, the most famous channel in the Arab world, seems to be the main factor in drawing people to cafes. Al Jazeera has around eight sport channels that play sports nonstop. Moroccans have a special interest to soccer, particularly the Spanish teams. To watch a match between Real Madrid and FC Barcalona, it is necessary to arrive at the cafe five hours before the match begins to reserve a seat.

I know some people who have found full time work, but are unsuccessful in their jobs because they are addicted to sitting in cafes and watching sports matches. For them, working means to miss watching their much loved FC Barcalona or Real Madrid. Often these jobs are not appealing in the first place: companies don’t pay well, or exploit their employees. “I cannot work from 8 am to 6 pm,” said Khalid, a young man with no degree. “I get bored quickly and the wages don’t make it worth it. I prefer doing bricole, and after that going to a cafe or with friends instead of being like a prisoner at work the whole day.” Many young people in Morocco prefer a flex-time job, which accommodates a day when they feel like they need to be doing something else, and sitting in a cafe can be scheduled to fit in with their work.

Morocco is well known for its many feasts and celebrations ranging from Ramadan to Eid Adha and Eid Alfiter to Ashura and the summer shopping programs. These provide young people with an opportunity to generate some income. Ramadan, for instance, is a special month not only in Morocco, but in all Muslim countries. The unemployed will often find things to sell to attract Ramdan customers.

Ashura also provides opportunities to practice Bricolage. It’s tradition on Asura to bring happiness to children by giving them toys. Bricolers will  target children as customers on this special day. The heat of summer also provides great opportunities to scramble for cash. Some sell cookies or umbrellas; others might work as parking lot guard. These are examples of how “Bricolage” can help unemployed people get by, and maybe even remain financially solvent throughout the year.

Mohammed Quasserras teaches English in Rabat. He received a B.A. in English Studies and Culture. He has published a number of articles and short stories in different publications. In 2009, he was selected as the best Moroccan writer (short story category) by British Council in England with an incorporation with the university of London in Paris which allowed him to participate in Médi-Café Trans-Maghreb Creative Writing Project where  writers from Morocco, Algeria, Tunisia and Britain were brought together. In 2010, Quasserras was a visiting Fulbright Scholar at City University of New York teaching Arabic studies. While in the U.S., he studied American foreign policy, anthropology and modern Arab history.

This story is © Morocco World News