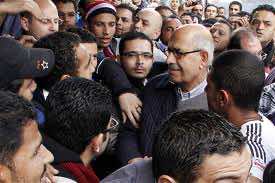 Egyptian presidential candidate Mohamed ElBaradei has accused Islamist parties which won a majority in elections last week of relying on slogans which he said would be laid bare if they gained power.

The Islamists picked up two-thirds of votes cast for parties in the election last Monday and Tuesday in a third of Egypt’s districts, with a new hardline Salafi party winning almost a quarter.

“Let them govern and have their chance. People will realise that slogan are not enough,” ElBaradei said in an interview published on Tuesday by the independent newspaper Al Shuruq.

The former head of the UN nuclear watchdog and Nobel laureate is close to the liberal pro-democracy movement that toppled the 30-year regime of autocrat Hosni Mubarak in February.

He is also an outspoken critic of the military rulers who took power after the ousting of Mubarak, accusing them of mishandling the process of ushering in democracy in the Arab world’s most populous nation.

“We live today in a fascist system with military tribunals and emergency law and if there is another round of the revolution it will be full of anger and violence,” he warned.

“The situation is going from bad to worse after the failure of the military council in managing the transition process,” said ElBaradei, adding that young Egyptians were “completely despondent because nothing has changed.”

Last month, 43 people were killed and more than 3,000 injured in clashes between security forces and protesters who again took to the streets to demand the resignation of the military council, which they suspect of wanting to retain power.

The army pushed back the original timetable for handing over power to civilian leaders and had proposed a series of measures to shield itself from scrutiny from the new elected government.

“If new elections take places in one or four years, it is you, the youth, that is going to govern,” ElBaradei added.