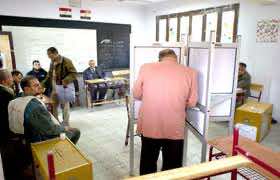 The Muslim Brotherhood, the biggest winner in the first round of Egypt’s elections, has threatened to take to the streets if there is any attempt to manipulate results.

The group, a moderate Islamist movement banned for decades under the rule of deposed autocrat Hosni Mubarak, gained 36.6 percent of votes cast on November 28-29 for parties in a new lower house of parliament.

“We will take to the streets if there is any cheating in the elections or manipulation of the constitution,” its leader Mohammed Badei told Egyptian television in comments reported by the press on Tuesday.

A new constitution is to be drawn up next year once a lower and upper house of parliament have been elected by March.

The new civilian powers are set to face a fierce struggle with the army, which has already indicated it wants to retain many of the privileges of the Mubarak era, including oversight over military-related legislation.

Badei stressed “the Muslim Brotherhood does not want a monopoly on power,” repeating its stated position that it favours participation of other parties in a coalition.

The first round of voting in the multi-stage election wraps up on Tuesday, with Islamist parties including the Brotherhood and hardline Salafist groups winning about two-thirds of votes.

There have been various problems with the election, the first since Mubarak was toppled in February.

On Monday, the election commission dramatically revised down the turnout level from 62 percent to 52 percent and said results from several polling stations would be withheld because of violations.