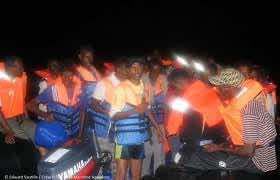 Maltese coast guards on Tuesday rescued 44 refugees from Somalia in a rubber dinghy coming from Libya that had issued a distress signal during a four-day crossing in which two people reportedly died.

The 31 men, 10 women and three children were packed on to a seven-metre (23-foot) boat that had begun taking in water shortly after leaving Libyan shores on Saturday and issued an SOS picked up by Italian authorities.

The message was passed on to Malta and the boat was intercepted some 60 nautical miles south of the island state, which is at the centre of the Mediterranean between Italy and Libya.

“They were two more but they died before you came to help us,” a Maltese military source quoted the refugees as saying.

Journalists were not allowed to speak to the refugees independently.

Representatives of the UN refugee agency in Italyhad called on Monday for the boat with the Somalis on board to be rescued.

Libya also on Monday said that it had prevented some 400 African migrant workers from leaving for Italy by intercepting their boat off the coast.