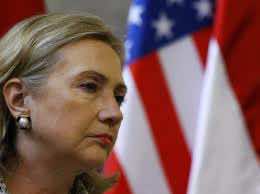 US Secretary of State Hillary Clinton urged Islamist parties who performed well in Egypt’s first round of parliamentary elections to respect religious freedom and women’s rights.

“In Egypt, new actors will be seated in the parliament, including representatives of Islamist parties,” Clinton said in a speech to the Organisation of Security and Cooperation in Europe.

“Transitions require fair and inclusive elections, but they also demand that those who are elected embrace democratic norms and rules,” Clinton said after the Muslim Brotherhood and Salafists picked up 65 percent of the vote.

“We expect all democratic actors and elected officials to uphold universal human rights, including women’s rights, to allow free religious practice, to promote tolerance and good relations among communities of different faiths, and to support peaceful relations with their neighbours,” she said.

The last was a reference to Egypt’s peace treaty with Israel, which Islamist parties have criticised.

“Democracies are guided by the rules of the game, including the inevitable transfers of power from one party to another. The Egyptian people deserve a democracy that is enduring,” she said.

“We urge the Egyptian authorities to ensure that free and fair voting continues through next election rounds and to adhere to their commitments to move toward a new civilian government,” she said.

“Over the next few months, the Egyptian government must protect peaceful protesters and hold accountable those responsible for previous incidents of violence,” Clinton said.

In the opening phase of Egypt’s first polls since an uprising ousted Hosni Mubarak, the Muslim Brotherhood’s Freedom and Justice Party won 36.6 percent, followed by the hardline Salafist Al-Nur with 24.4 percent and the moderate Al-Wasat with 4.3 percent.