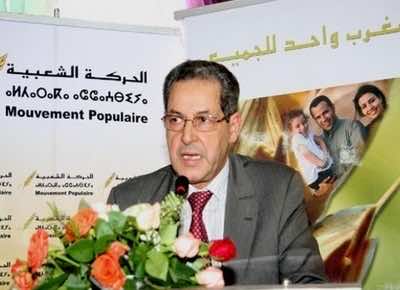 The Popular Movement (MP) said, on Tuesday, that it is going to take part in the upcoming coalition government headed by the Secretary General the Party of Justice and Development  (PJD), Abdelilah Benkirane.

In a statement carried by Maghreb Arab Press, the political bureau of the MP said at the end of a meeting in Rabat, that the party showed a positive reaction toward the offer by the Head of government regarding its participation in the new government.

“This decision reveals the Popular Movement’s commitment to serving Morocco from any position”, said the same source.

“After comprehensive discussions, the party opted to join the government of Benkirane in line with its principles, putting the national interest on top of its priorities,” added the statement.

The MP obtained 32 out of the 395 parliamentary seats in the legislative elections held of November 25, in which the PJD obtained 107 seats, but it still needs 198 seats to form a new government.

After the Socialist Union of Popular Forces (USFP) decided to join the opposition, the other parties most likely to participate in the new government are  the Istiqlal party of Abass El Fassi, outgoing Prime Minister and the Party of Progress and Socialism (PPS).

This is the first time the PJD will be entrusted with the task of heading the government, after it spent 14 years in opposition. In its first participation in the elections in 1997, it obtained 8 seats.

In the first elections held under the rule of King Mohammed VI in 2002, it obtained 42 seats and in 2007 it won 47 seats and came in second position after the Istiqlal party.