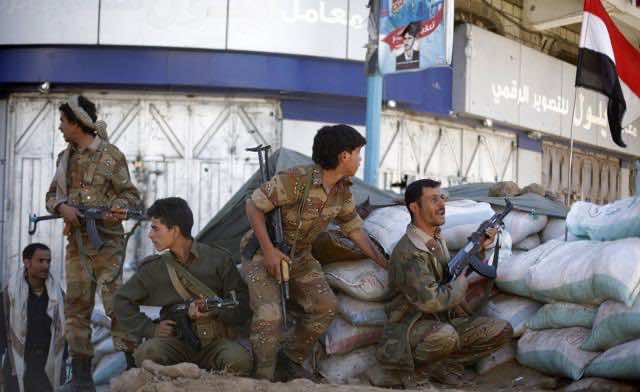 The fighting, which raged near government buildings and the compound of Sadeq al-Ahmar, a foe of Saleh commanding significant forces, were the latest challenge to a Gulf-brokered transition plan to prevent civil war after 10 months of bloodstained protests demanding an end to Saleh’s 33-year rule.

Top oil exporterSaudi Arabia sharesU.S. fears that a slide toward more chaos inYemen would embolden the country’s al Qaeda wing – against whichWashington has waged a campaign of drone strikes – in a country sitting next to oil shipping routes.

Witnesses said government forces clashed in the capital’s al-Hasaba district, a stronghold of al-Ahmar, with shells falling on government buildings including the headquarters of state radio and the prime ministerial offices.

Prime Minister-designate Mohammed Basindwa, a former foreign minister representing opposition parties in a government to be split with Saleh’s party under the terms of the transition deal, told Reuters on Tuesday he expected a new government lineup to be announced by Thursday.

“Militants and army soldiers have been fighting near the Interior Ministry since dawn. They’re using machineguns and RPGs,” Abdul Rahman, a Sana’a resident, said by phone as gunfire reverberated in the background.

“We are trapped in our homes and can’t get out,” he said.

The capital saw open warfare between Saleh’s forces and those of al-Ahmar, a leader of the powerful Hashed tribal confederation, in May after Saleh ducked out of signing the transition deal backed by the Gulf Cooperation Council.

Saleh finally agreed to the transition last month and has formally handed his powers to his deputy. But the deal is threatened by an eruption of fighting between Saleh’s foes and allies in Taez, 200 km (120 miles) south of Sana’a that has left at least 20 dead and led the U.N. to demand that government forces stop shooting protesters.

Any new government faces challenges including rising separatist sentiment in the south, once an independent socialist republic, with which Saleh’s north fought a civil war in 1994 following unification four years earlier.

The region is also the site of conflict between government forces and Islamist fighters which has displaced tens of thousands of people.