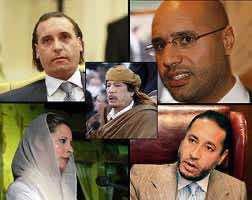 Mexican officials said Wednesday they foiled a plan in September to smuggle one of Moamer Kadhafi’s sons and other family members of the former Libyan leader into the country.

Government Secretary Alejandro Poire said Mexican intelligence officials  uncovered the plot at the height of pro-democracy protests in the north African nation to bring Saadi Kadhafi and other relatives into Mexico on false papers.

Poire said Mexican authorities had broken up a ring involving people from different nationalities, including Mexicans, Canadians and a Danish national who had bought properties in Mexico to be used as “safe houses.”
The plan, discovered on September 6, appeared to be preparing to use private flights to fly Kadhafi’s relatives to an area on Mexico’s Pacific coast, the official said.

Saadi Kadhafi, 38, fled Libya across its southern frontier to Niger in August amid the protests against his authoritarian father’s 42-year regime. Moamer Kadhafi and another of his sons were killed in October after their capture by forces loyal to the National Transitional Council. Libya’s new leadership wants Saadi Kadhafi to stand trial for crimes allegedly committed while heading the country’s football federation.

Another son, Seif al-Islam, has been captured and the International Criminal Court judges has called on Libya’s new leaders to inform them if and when they intend to hand him over to face charges for crimes against humanity.