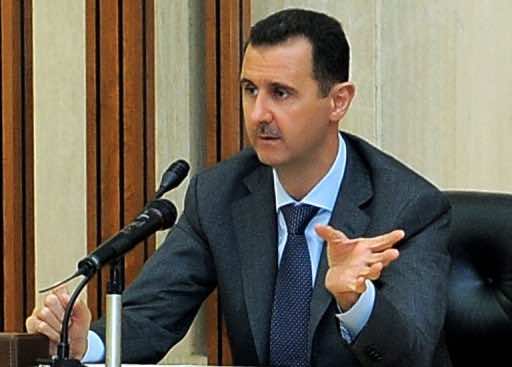 Syrian President Bashar al-Assad denied ordering the killing of thousands of protesters and said “only a crazy person” would target his own people as global pressure mounted Wednesday on his regime.

In a rare interview, Assad said that he was not responsible for the nine months of bloodshed and drew a distinction between himself and the military — an assertion that the United States called “ludicrous.”

“We don’t kill our people,” Assad told US network ABC. “No government in the world kills its people, unless it’s led by a crazy person.”

“There was no command to kill or be brutal,” Assad told veteran ABC News interviewer Barbara Walters.

Assad said that security forces belonged to “the government” and not him personally.

The United Nations estimates that more than 4,000 people have died as Syria cracks down on protesters, who have built into the greatest challenge yet to Assad amid a wave of uprisings in the Arab world that have toppled authoritarian leaders in Egypt, Libya and Tunisia.

Assad dismissed the death toll, saying: “Who said that the United Nations is a credible institution?”

“Most of the people that have been killed are supporters of the government, not the vice versa,” Assad said in English, giving a figure of 1,100 dead soldiers and police.

“I find it ludicrous that he is attempting to hide behind some sort of shell game but also some sort of claim that he doesn’t exercise authority in his own country,” Toner told reporters.

“There’s just no indication that he’s doing anything other than cracking down in the most brutal fashion on a peaceful opposition movement,” he said.

Alistair Burt, the British Foreign Office minister for the Middle East, hailed the efforts by the Arab League and voiced hope for greater action by Russia, the key ally of the Assads since the Soviet era.

“The isolation of Syria will continue and intensify,” Burt told AFP as he visited Libya in the wake of the overthrow and killing of leader Moamer Kadhafi.

Turkey is home to around 7,500 refugees who have fled Assad’s crackdown. Colonel Riyadh al-Asaad, who heads a group of defectors called the Free Syrian Army, is based in a border camp and, unlike some other dissidents, has called for foreign air strikes.

A Turkish diplomat, speaking to AFP on Wednesday on condition of anonymity, said his country would not allow itself to be the springboard for attacks and denied that there was military activity on the Syrian side of the border.

The Arab League has suspended Syria and has threatened new sanctions if Assad does not allow in observers. Syria initially refused but at the last minute offered to let in monitors in return for an end to sanctions.

In the ABC News interview, Assad brushed aside the international pressure, saying: “We’ve been under sanctions for the last 30, 35 years. It’s not something new.”

Witnesses and human rights groups say Syrian forces have used intense force, mass arrests and torture to try to crush the biggest threat yet to the Assad family’s rule.

The conflict is said to have taken a heavy toll on children who either took part in protests or were targeted because of their parents’ involvement. A UN-appointed investigator said that Syria killed 56 children in November alone.

“Every ‘brute reaction’ was by an individual, not by an institution, that’s what you have to know,” Assad said.

Looking to the post-Assad future, US Secretary of State Hillary Clinton met Tuesday in Geneva with the dissident Syrian National Council and urged the protection of women and minorities.