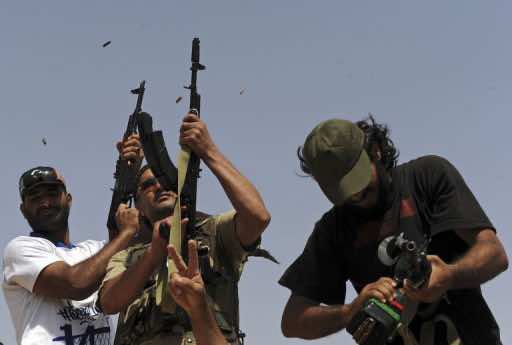 Hundreds of residents and policemen in Tripoli protested jointly on Wednesday against former rebels who toppled Moamer Kadhafi but are still camping out in the capital and still have their weapons.

Men, women and children waving Libya’s national flag and shouting slogans against the militias gathered in Tripoli’s landmark Martyrs Square in a rally organised by the city council and backed by the interim government.

“Safety comes when there are no weapons,” teacher Salwa Lamir told AFP as she held a banner reading: “No weapons in Tripoli.”

“We’re protesting against weapons and people using weapons. I want the militias who came from outside Tripoli to leave. They have to go back to their homes and continue with their studies,” she said. Around her the crowd chanted “The people want safety!”

On Tuesday, the interim government gave its firm support to a two-week deadline for militias to quit Tripoli, backing up a threat from the capital’s council to lock down the city if they fail to do so by December 20.

The militias, mostly from the cities of Misrata, Zintan, took part in the liberation of Tripoli in August and have been in the city ever since, often occupying buildings to use as their headquarters.

They have manned checkpoints on key roads and also at installations such as the capital’s international airport.

Pressure to disarm the former rebels in Tripoli has mounted after local media reported several skirmishes between various factions in recent weeks.

On October 5, the country’s new leaders ordered all heavy weapons removed from Tripoli, warning that their prolonged presence risked giving a bad image to the revolution which ousted and killed Kadhafi.

“These militias even intervene in police work, often asking us to free comrades of theirs held by us. This obstructs the application of the law,” said one agitated policeman, Mustafa Salem.

Behind him dozens of officers walked in the square shouting “Libya is free now, the militias must leave!” as others sounded the horns of police vehicles.