Morocco World News
Home Uncategorized Exclusive: One of the Sahrawis Arrested in Mauritania is Believed to... 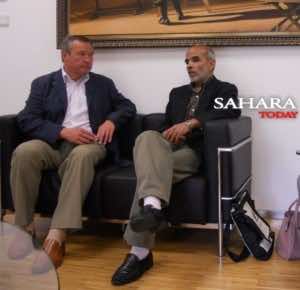 Hamady Aghdafna Ahmed Baba, one of the two Sahrawis arrested in Mauritania this week for their alleged involvement in the kidnapping of three aid worlers in a camp of the separatist organization (Polisario), is believed to be the son of the diplomatic representative of the Polisario Front in Cantabria, a region located in northern Spain. This is at least what Mauritanian and Spanish security sources told Correo Diplomático and Morocco World News. The alleged father of the Saharawi prisoner is none other than Hamudi Ahmed Baba, a veteran of the Polisario Front who was formerly the representative of the Sahrawi independence in the community of La Rioja, also in northern Spanin.

Mauritania’s anti-terrorism police sources have confirmed that the two Sahrawis arrested on Monday morning in Nouadhibou, in the northwest, from where they were transferred to the capital, Nouakchott, had confessed their involvement in the kidnapping of Westerners on 23 October in Rabuni, near Tindouf in the area controlled by the Polisario Front. This version has been confirmed throughout the day on Tuesday by AFP, whose information was also based on police sources.

Along with the aforementioned Ahmed Baba, was also arrested Ahmed Baba Maminna Al Aguira. Throughout the day various rumors have circulated about the arrest of a third Saharawi allegedly involved in kidnapping, rumors that have not been confirmed by Correo Diplomático and Morocco World News. The three aid workers, two Spanish and one Italian, have been delivered by three kidnappers to Al Qaeda in the Islamic Maghreb (AQIM) in exchange for the payment of “a large sum of money.”