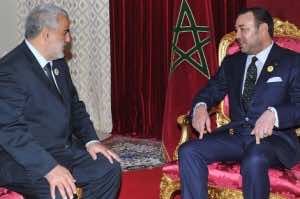 Abdelillah Benkirane’s phone rang during the evening of Sunday, November 27th. This was not an average call either. On the other end of the phone, a royal cabinet member informed him that finally King Mohamed VI would receive him on Tuesday, November 29th in Midelt, in the southeast, where the sovereign was to inaugurate the fourteenth edition of The Week of Solidarity.  Benkirane’s informant told him that a plane had been specially chartered for this purpose, and would await him on Tuesday in the Rabat-Salé Airport.

One last detail, the first Islamist of the kingdom was called on to wear a suit and tie for the occasion and within a very specific range of colors, so there was no chance of matching the regalia of the King. The tie has been, according to some observers, “the first concession” made by the secretary general of the Islamic Party of Justice and Development Party (PJD) who won the legislative elections on November 25th in Morocco. Accustomed to large shirts in the style carried out by the Muslim Brotherhood in Egypt, those who know the prime minister claim Benkirane would not wear a tie to his own wedding.

Kiss on the shoulder, rather than on the hand

Now in front of the king, the Islamist leader was content to kiss Mohamed VI’s shoulder instead of the traditional kissing of the hand. “The protocol supports both, hence it is far less dramatic and Benkirane has opted for the gesture that he considered most appropriate,” a Moroccan photographer confessed to Correo Diplomatico who has followed the king closely and therefore knows in depth the intricacies of Makhzen protocol.

The hearing only lasted a few minutes while Mohamed VI and Benkirane departed in good spirits. It was the first time that both sides met each other in person and much had been speculated about the “little sympathy” that the king felt for Benkirane. Either way, the polls have spoken and, in compliance with the new Constitution, Mohamed VI has been left with no other choice but to appoint the secretary general of the PJD as new prime minister. “I have met an exceptional and friendly individual,” said Abdelillah Benkirane as he made his exit.

The new prime minister then embarked on a Royal Gendarmerie helicopter that took him back to Rabat, where he was to begin the transactions for forming a solid majority that will allow him to launch his new government.