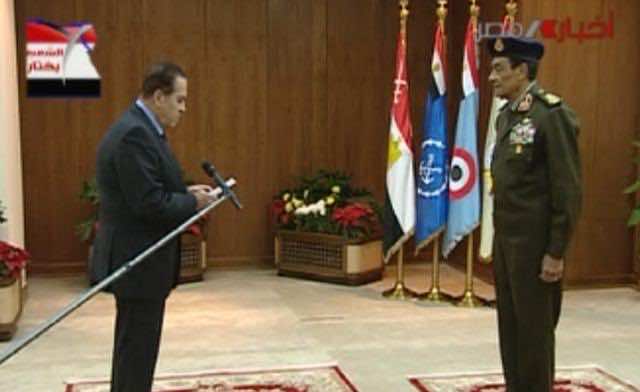 Egypt’s military rulers on Wednesday gave premier Kamal al-Ganzouri presidential powers, but added he would have no control over the army or judiciary, a report said.

“The Supreme Council of the Armed Forces delegated presidential powers to Kamal Ganzuri according to the law, but not the armed forces and the judiciary,” the official MENA news agency reported.

Mohammed Ibrahim Yusuf, who headed police in the district of Giza in the capital, was sworn in before the head of Egypt’s ruling military council, Field Marshal Hussein Tantawi, state television said.

The new finance minister is Mumtaz al-Said, while the foreign minister from the former cabinet, Mohammed Kamel Amr, was reappointed.

Egypt’s second caretaker cabinet appointed after the toppling of Hosni Mubarak in February resigned on November 21 under pressure from violent protests against its handling of the country’s transition to democracy.

Kamal al-Ganzouri has been struggling to put together a cabinet since Egypt’s military rulers brought him out of retirement to lead a new interim government nearly two weeks ago.

State television on Tuesday confirmed Ganzouri’s appointment of Mumtaz al-Saeed as finance minister, but said two portfolios, including the powerful interior ministry, had yet to be filled.

The appointment of Ganzouri, 78, has been criticized by protesters seeking a full purge of the system because he served as prime minister in the 1990s under ousted Hosni Mubarak.

“We asked for a government that has powers and is not appointed by the military council,” said Yamen Hamza, a protester who has joined rallies in the past week in Tahrir and outside nearby government buildings. “We will stay outside the Cabinet so that we can prevent the prime minister, who we don’t want, from entering.”

The military itself has jealously shielded its own broad interests from civilian oversight. But, under pressure from protests, the army has said it would cede power to civilians in mid-2012 after a presidential vote, sooner than it had planned.

A senior leader in the Muslim Brotherhood’s Freedom and Justice Party, which secured the biggest chunk of votes in first round of a parliamentary election, said it was reviewing Ganzouri’s statement on being granted more powers.

The group has played down suggestions that Islamists would try to dominate parliament when it gets to work after the staggered election is completed in January.

It promised Egyptians voting in a run-off on Tuesday it would work in a broad coalition if its party wins elections.

There are fears that there could be many problems when it comes to the economy and tourism because the Brotherhood and the Salafis lack experience in state affairs, said Nabil Abdul Fattah, director of the al-AhramCenterfor Social and Historic Studies. The final results will dictate the Muslim Brotherhoods choices of alliances and whether they will resort to the Salafis or see them as a liability and turn instead to the moderate, democratic forces.

The announcement of the government was postponed from Sunday to Wednesday, Ganzouri said, because of difficulties in appointing a new interior minister hours before the parliamentary election’s first stage run-offs.

Ganzouri said his “government of national salvation” would concentrate on Egypt’s security and its economy.

The new interior minister should focus on crime, he said, apparently seeking to allay criticism that the police have been more keen on cracking down on political dissent than on keeping Egypt’s streets safe in the chaos that followed the uprising.

The new finance minister, Saeed, is a finance ministry veteran who was pulled out of retirement to serve as deputy to outgoing Finance Minister Hazem al-Beblawi, who was appointed in July, a ministry source said.

About half the cabinet have kept the posts they had under the outgoing premier, Essam Sharaf. Two of the ministers served when Mubarak was still in office and have survived successive reshuffles.

Pressure on the army

Critics accused Sharaf’s cabinet of not carrying out deep enough reforms of the police force, which was hated for the way it crushed dissent under Mubarak. Police were accused of heavy-handed tactics in violent clashes with demonstrators last month.

The protests pushed the army to accept the resignation of Sharaf’s cabinet.

Protesters in Cairo and other cities demanding an immediate end to military rule faced teargas, pellets and rubber bullets in clashes that killed 42 people. They also accused police of firing live rounds. Officials denied this.

Politicians have also accused the army of meddling in economic policy, particularly over whether or not Egypt will sign up to a $3.2 billion financing facility from the International Monetary Fund to supports its battered economy.

Egypt first negotiated the facility this year but turned it down in the summer in part because the then finance minister said the army did not want to build up debts. The next minister said Egypt was inclined to take the funds, but the incoming minister has now said Cairo is not ready to decide.

A senior army finance official said this month that Egypt did not want foreign borrowing because it came with too many political strings attached.

Egypt’s gross domestic product grew 1.8 percent in the fiscal year through June, the slowest in at least a decade. The unrest has also drained $15.9 billion from official foreign currency reserves in the past 11 months to $20.15 billion, a 44 percent plunge.

Run-offs for the initial stage of the poll ended on Tuesday. Voting for the second round, which covers Giza, Suez, Ismailia and six other governorates, begins on Dec. 14. The third round begins on Jan. 3 and final results are due 10 days later. Presidential elections will be held by the end of June, the army has said.