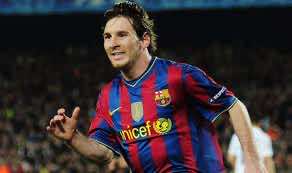 Lionel Messi has described Barcelona’s ‘Clasico’ clash against bitter rivals Real Madrid this weekend as one which could define their season, coming just before an exhausting trip to Japan.

The European champions trail Real by three points having played a game more in their bid to win La Liga for a fourth year in a row, giving Saturday’s clash added significance.

Barca fly to Japan for the Club World Cup after the match and Messi warned defeat at the Bernabeu combined with a 20,000-kilometre round trip to the Far East could derail their season.

“It’s vital we get a good result,” said the mercurial Argentina forward. “It would set us up for the rest of the season.

“If we don’t then we’re not going to have much time to relax because we’ve got the trip to Japan, which is very important for us too.”

Barcelona will be bidding to win the seven-team Club World Cup for the second time in three years, after beating Argentine side Estudiantes in Abu Dhabi in 2009.

“We’ve got some lovely memories of the last one we played in,” Messi told www.FIFA.com before Thursday’s opening game between Japan’s Kashiwa Reysol and Auckland City of New Zealand.

“We can’t wait to experience that again and celebrate in the same style.”

Brazil’s Santos, who won their third Libertadores Cup in June, almost 50 years after Pele led them to back-to-back titles in 1962 and 1963, will provide a stern test for Barca.

A likely final between the two sides has been given extra spice after Pele recently claimed Brazil forward Neymar was a better player than Messi.

“Neymar is much better, more complete,”Brazil great Pele was quoted as saying by Globoesporte. “He hits well with both feet, can dribble off either side, and scores goals.”

The three-times World Cup winner said 19-year-old Neymar held the edge because he “plays well for both Santos and the national team.”

Messi has refused to be drawn into any individual comparisons before Pep Guardiola’s side enter the tournament, along with Santos, at the semi-final stage next week.

“We are always under the obligation to win,” Messi said of the all-conquering Catalan giants.

“It’s a really important tournament and we’ll try to come out on top, just as we always do.”

Messi said Barcelona would not be taking their opponents –Tunisia’s Esperance or Asian champions Al Sadd ofQatar– lightly in their semi-final on December 15.

“We can’t afford to relax,” he said. “Everyone thought the two favourites were going to reach the final last time and (Brazil’s) Internacional fell short.”

Messi also refused to blame jet-lag if Barca fail to lift the trophy in Yokohama on December 18.

“We’ll have the time to adapt,” he said of the energy-sapping trip. “With all the trips to Argentina and South America we’re used to all the travel.”

A quick turnaround after their whistle-stop trip to the Far East could also take its toll on Barcelona’s La Liga and Champions League campaign but Messi brushed off concerns about fatigue.

“We know what we’re capable of and how far we can go,” he said. “We’ve got a lot of games to get through, that’s true, and it’s never easy to maintain top form.

“But we really don’t care what people are saying. We’re staying cool, calm and collected. Nobody knows what this team is capable of better than we do.”