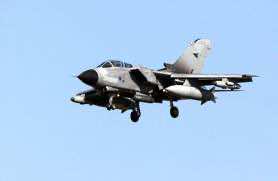 British military operations in Libya cost £212 million, defence minister Philip Hammond said Thursday, far higher than the tens of millions the government estimated at the start of the campaign.

Britain was at the forefront of international efforts to support Libya’s rebels against Moamer Kadhafi’s regime, launching UN-mandated military action with France and the United States in March before NATO took over.

But the campaign to oust Kadhafi took longer than expected, pushing up the cost for Britain at a time when the government is seeking to slash public spending.

Kadhafi was captured and killed by rebels in October shortly before Libya’s interim leaders declared the liberation of the country.

“Our final assessment of the net additional costs of operations in Libya is £212 million (250 million euros, $330 million), made up of £145 million of operating costs plus a further £67 million on replenishing munitions,” said Hammond.

He hailed the final cost as “a successful outcome in every respect”, stressing it was lower than an estimate of £260 million given by his predecessor Liam Fox in October.

But the figure is still potentially embarrassing for the government after finance minister George Osborne predicted at the start of the campaign that it would cost “in the order of the tens of millions, not the hundreds of millions of pounds.”

The cost was met from government reserves, rather than normal budgets, at a time when the Conservative-Liberal Democrat coalition has imposed deep cuts to spending, including the defence budget, as it seeks to slash a record deficit.