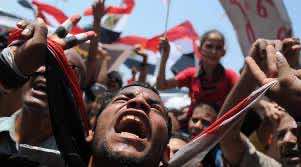 Egypt’s biggest political group the Muslim Brotherhood clashed with the country’s army leaders on Thursday, accusing them of trying to “marginalise” parliament over the writing of a new constitution.

Mohammed el-Baltagui, one of the leaders of the Brotherhood’s political party, said the movement planned to pull out of a contact group with the army leaders who have been in power since the toppling of Hosni Mubarak in February.

“We consider that any attempt to marginalise the parliament or to reduce its prerogatives in favour of any other unelected entity is a move to bypass the will of the people,” he told AFP.

On Wednesday, in comments to a small group of foreign journalists, a member of the ruling junta said the army would have a final say over those appointed to write a new constitution next year.

“This is the first stage in our democracy,” Major General Mukhtar al-Mulla was quoted as saying by The Guardian newspaper. “This is not out of mistrust of the parliament,” he added.

The Brotherhood, which emerged as the biggest winner in the first stage of the just-concluded parliamentary elections, wants the assembly to oversee the constitution writing process.

Analysts had forecast a fierce power struggle between the new civilian political powers that have emerged since the fall of Mubarak and the ruling army generals.