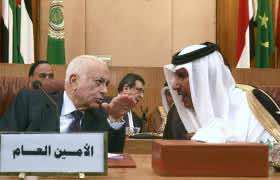 Arab League ministers will meet this weekend to mull a response to Syria which wants the bloc to lift sanctions as its price to allow observers to monitor deadly unrest, an Arab diplomat said Thursday.

Syria said on Sunday it will allow observers into the country as part of an Arab peace plan to end months of violence, in a bid to avoid sweeping sanctions the bloc has decided to impose on the Damascus regime.

But Foreign Minister Walid Muallem, in a letter to Arabi, said Syria would accept the monitors under certain conditions.

According to the text, published in the Syrian press on Tuesday, Muallem demanded the complete overturn of sanctions approved by the Arab League on November 27.

“The government considers all decisions taken by the Arab League… including Syria’s suspension and the sanctions taken by the ministerial committee against it, to be null and void once Damascus signs the protocol” for observers, said the text.

The head of the pan-Arab organisation was in Iraq on Thursday to seek Baghdad’s help in trying to persuade Syria to allow observers into the troubled country.