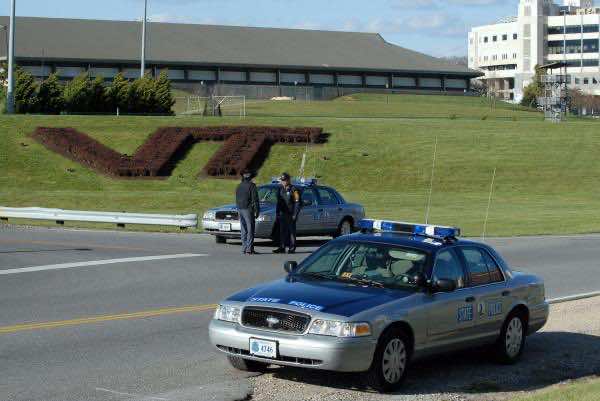 Site of 2007 massacre that left 32 people dead is on lockdown after shots fired on campus.

At least two people have been killed after shots were fired at Virginia Tech University in the US, the site of a 2007 massacre that left 32 people dead.

University officials confirmed the deaths of a police officer and one other person following the shootings on Thursday.

Police were apprehending one person, The Collegiate Times, the university’s newspaper said, before issuing a Twitter message saying the “person who surrendered at Performance Arts building is not under arrest”.

A news release from the school said the police officer had pulled someone over for a traffic stop and was shot and
killed.

The university paper also said the dead police officer was in the Cassel Coliseum near McComas Hall.

“Stay indoors. Secure in place,” the university said in its Twitter feed.

“I want to make it clear that Tech is really very serious about their security and this is not what defines us and this is not normal for us. It is not the same kind of school that the media hounded on in 2007,” Haugen said.

“They’re very proactive … very serious about security, especially after what happened in 2007. We’re not a violent campus.”

The school described the shooting suspect on its website as a white male in grey sweat pants and a maroon sweat shirt.

The shooting came the same day as Virginia Tech was appealing a $55,000 fine by the US Education Department in connection with the university’s response to the 2007 rampage, when a student gunman killed 32 students and faculty and then shot himself.