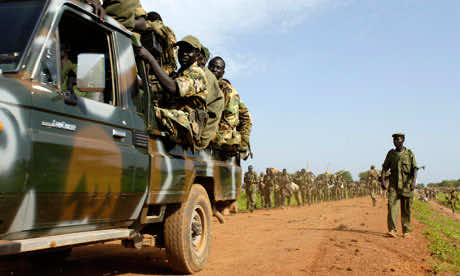 The security situation in the disputed area of Abyei remains fragile, with both South Sudan and Sudan failing to withdraw their armed forces as agreed under a demilitarization pact reached in June, the head of United Nations peacekeeping told the Security Council today.

Similarly, despite significant efforts by an African Union panel and Haile Menkerios, the Secretary-General’s Special Envoy for Sudan and Southern Sudan, very little progress has been made in establishing temporary administrative arrangements for Abyei, Hervé Ladsous, Under-Secretary-General for Peacekeeping Operations, told the Council in a briefing.

“This impasse is not a good sign for the stabilization of the Abyei area and the implementation of the mandate of UNISFA [UN Interim Security Force for Abyei], which depends both on the creation of a functioning administration and withdrawal of armed forces of the two parties,” said Mr. Ladsous.

“In this complex and challenging environment, UNISFA continues its efforts to implement its mandate. As of today, 2,853 troops are on the ground, following the deployment of the second battalion in October.”

Two police officers have also been deployed to plan for the implementation of the mission’s police mandate once the Abyei Police Service has been established, he added. UNISFA has also recovered and disposed of more than 1,000 unexploded ordinance and mines ahead of the arrival of a UN mine action team, which began deploying on 2 December.

Logistical challenges involved in supporting UNISFA’s deployment and operations include the long supply chains from Port Sudan and South Sudan, constraints on the operational availability of a logistics space, and gaps in essential support personnel, Mr. Ladsous said.

He also updated the Council on negotiations between Sudan and South Sudan held in the Ethiopian, capital, Addis Ababa, late last month under the auspices of the African Union High-level Implementation Panel (AUHIP).

Discussions on the border issue also ended without agreement on the next phase of the border demarcation process for the agreed areas or on the process required to resolve differences over the disputed ones. In addition, no progress has been made on the adoption of an operational map defining the safe demilitarized border zone, Mr. Ladsous said.

He urged Council members to press the parties to agree on the mapping of the border zone and technical details for the monitoring mechanism, under the auspices of AUHIP.

“A return to the negotiating table is absolutely essential to prevent a further descent of the two new countries into violence, which would inevitably have an impact on the whole region.”

South Sudan became independent from Sudan on 9 July. A referendum on the status of the Abyei area on the border was to have been held in January this year, but never took place amid disagreement on voter eligibility.

Dozens of people have been killed this year as a result of clashes in Abyei and surrounding areas and tens of thousands of have been forced to flee their homes.