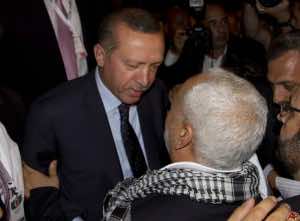 Beyond European and world leaders, among which have included, Ban Ki-moon, Hillary Clinton, Nicolas Sarkozy or even the next president of the Spanish Government, Mariano Rajoy, the heads of other Islamist parties have led the wave of congratulations reaching in recent days the headquarters of the Party for Justice and Development in the district of Les Orangers in Rabat.

Turkish Prime Minister Recept Tayyip Erdogan has been one of the first Islamist parties to congratulate the Party of Justice and Development Party of Abdelillah Benkirane after his victory in the parliamentary elections of November 25.

They have not been alone in congratulating the PJD. Messages have also come in signed by the leaders of Ennahda (Renaissance) in Tunisia, the flamboyant winners of the elections for the constituent assembly in the North African country; the Algerian Islamic Salvation Front (FIS) and the Movement for Peace and Democracy (MPD); from Hamas and even the Al Islah party, the main opposition force in Yemen. Moreover, the famous mufti Sheikh Youssef Qaradawi, known for his incendiary sermons, has not missed the opportunity to send a missive of joy to the PJD.

In addition, the PJD has opened a book of gold in the party headquarters in Rabat for supporters and guests to express their messages. After long years of crossing the desert, the election victory has caused many to get on the ‘bandwagon’ of the Moroccan Islamist party. Among those, are members of the Authenticity and Modernity party (PAM) of Fouad Ali El Himma, the “the friend of the king” who in recent years has fought a direct battle against the party of the lamp.

“Boasting little ideological coherence and an acute and embarrassing sense of political opportunism, perhaps with a view to getting some privileges  from the new government, some members of PAM have not hesitated to recognize their Islamist sympathies,” highlights a journalist from the daily Akhbar Al Yawn.

Also standing out are messages that have been multiplying for days from some directors of the Popular Movement as well as the Constitutional Union seeking a meeting with the PJD, undoubtedly to make a possible alliance that would allow leaders from the two conservative parties to occupy a ministerial position in the government.

Translated by Deniela Guerrero and edited by Benjamin Villanti

Morocco World News has exclusive partnership with Correo Diplomatico  and is the only entity allowed to publish its content in English. The English version of the story is © Morocco World News. This article can only be published as is with the link to Morocco World News, unless a written consent is given.