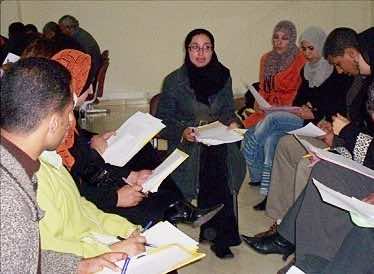 It is a sunny Sunday, Dalal grabs her modish handbag and heads to the Maure café nestled in the orche walls of the seqala in Casblanca. She cordially greets the café manager and two waiters hurriedly setting the tables. Dalal looks for her small notebook that seems to be lost in her baggy handbag.  She flicks through her novel looking for the folded pages and the highlighted passages. Being the first comer, she welcomes her friends who gradually arrive. She greets them warmly uttering compliments for some and articulating gentle complaints for others. The book club discussion is about to begin.

An unprecedented awakening among Moroccan youth especially university graduates has been noticed in the last two years. The emergence of book clubs and the inauguration of many cultural cafés across the country add to the growing social and political dynamics in the Moroccan society. In cultural café such as Tangerine in Casablanca, one can inhale the intoxicating steam of coffee while lending a conscientious ear to a conference in the table nearby or while examining the merged colors of a contemporary painting. Cultural cafés are the new forums in vogue sought by the new lineage of Moroccan intelligentsia.

Book clubs members hold their monthly meetings in cafés or restaurants. They tend to book the place beforehand especially if they are numerous to attend the discussion.  They order drinks and pastry while they are paving the way for their bookish debate. They explore and discuss a wide range of ideas they deem relevant to underscore. The book choice is often the outcome of a democratic process where the members nominate a list of books in different realms of knowledge such as literature, politics, religion, philosophy, sociology…etc. They choose among these books through a vote process based on the majority preference. A succinct presentation about the book and its author often serves as a prelude to the discussion. While some prefer to proceed methodically chapter by chapter, others opt for a holistic review based on the readers’ subjective impressions.

Though, in its burgeoning stage, Book clubs start to appeal to an avid audience desirous of expanding their knowledge in different disciplines and eager to hone their critical thinking skills. Many consider the affiliation to book clubs as an intellectual bid to revisit their own outlook on life. Mohammed, who is currently pursuing a master degree in Canada started attending book clubs discussions in Morocco since 2009. He appreciates the transaction of ideas between the debaters. He insists that book clubs are liable to raise awareness about critical issues in society.  Hafsa, another book club member asserts that her attendance to such cultural encounters has considerably changed her literacy practices.  Likewise, Rajaa, an ISCAE graduate makes it clear that she can now enjoy reading books she would never have picked off the shelves before her affiliation to the club.

As whether the increment interest towards book clubs in Morocco can be associated with the general mood of political awakening in the Arab world, Mohammed replies that he adhered to the club before the Arab spring tide. In fact, the awakening of Moroccan Youth has been fermenting for years and their growing interest to ideas and ethics is a genuine bid to grasp the reality around them.

Being sidelined by the system, some young Moroccans would try to find a surrogate platform for dialogue and self expression. In addition, the cultural agenda in Moroccan cities, such as Casablanca remains rather disjointed. The lack of local events that connect to youth concerns and aspirations triggers a feeling of frustration and alienation.

While some surrender to the hectic life of the big city, a new generation of youth attempts to snatch a moment of posed reflection in order to deconstruct the main blocs of an evasive reality. They are geared with their will, their modest organizational skills and the capacity to network quickly and effectively thanks to social media.

As book clubs stem from individual initiatives, its members are not usually censured if they do not attend the discussions. Thus, their assiduity remains unreliable and can be seen as an impediment to the continuity of the club’s agenda. It can also be laborious to find a quiescent place where the members can debate without overlapping sounds.

The emergence of such cultural congregation is not irrelevant to the general patterns of social and political change in Morocco. It can be perceived as a resistance strategy against a tide of trivializing trends prevailing in the Moroccan media that fails to nurture a generation’s desire of a full emancipation. In book clubs, members can elaborate their standpoints on imperative matters and, more importantly, they can voice them by engaging jointly in constructive discussions.

Are we witnessing the onset of a grassroots movement that will extend to other social classes and age categories? Is this new trend a precursor to a new ideology? The current situation suggests that these cultural groups may pave the way for a mindset change that is operating imperceptibly, but steadily and surely in the Moroccan society.

It is quarter past eleven, the debate has heated at some moments and cooled at others. Dalal sips the last drops of her mint tea and looks through a nearby window with a smirk on her face. She feels an overwhelming rapture enveloping her body and uplifting her spirits.

Loubna FLAH is a Moroccan national. She earned a master degree in Biochemistry from the Mohammedia faculty of science and technologies. She obtained also a bachelor degree in English studies from Ain Chok University after writing a dissertation about the aspects of sexism in Moroccan Arabic.  She graduated from the Ecole Normale Superieure in Rabat as a high school teacher of English.