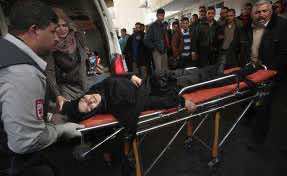 The latest round of fighting erupted on Thursday when an Israeli air strike targeted a car on a crowded Gaza street, killing two militants who Israel said were planning attacks against its civilians and soldiers.

Palestinian gunmen responded with a barrage of rockets fired deep into southern Israel, some landing near the city of Beersheba, causing no injuries.

A Hamas spokesman said the initial air strike was a crime and accused Israel of ratcheting up violence in the area.

“We hold the government of the Zionist occupation (Israel) fully responsible for this crime and for the new escalation,” spokesman Fawzi Barhoum said.

The Israeli military confirmed both air strikes had been carried out. It said the two men killed in the first strike had been planning an attack on Israeli civilians and soldiers along Israel’s border with Egypt’s Sinai peninsula.

“(They) were affiliated with a terrorist squad that intended to attack Israeli civilians and soldiers via the western border,” an army statement said.

Hamas, an Islamist group sworn to Israel’s destruction, has ruled the Gaza Strip since 2007.

The army statement said one of the militants had been involved in planning a suicide bombing in the southern Israeli resort of Eilat in 2007 in which three Israeli civilians were killed.

Violence between Israel and Gaza militants had abated recently although on Wednesday Israeli troops killed one Palestinian gunman and wounded another in a cross-border raid, witnesses and hospital officials said.