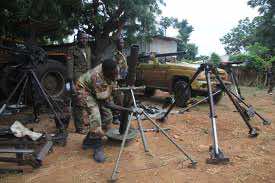 Fighting on Sudan’s disputed border with the south is a “war situation” that will escalate with the expected advance of more northern troops, South Sudan’s army spokesman warned on Friday.

He warned that fighting over the contested border town would intensify.

“They (SAF) are still in the territoryof South Sudan. This is a war situation and if they dont withdraw, the SPLA will force them out,” Aguer said.

“They are regrouping and waiting for more troops from Khartoum,” and also recruiting South Sudanese to fight for them, he added.

South Sudanseceded from the north in July after decades of civil war, but the two nations have failed to agree on contested territory or demarcate oil-rich sectors of their border.

On Thursday, Juba and Khartoumstaked rival claims to Jau at the UN Security Council as clashes continued and fears mounted of the former foes going back to war.

“A return to the negotiating table is absolutely essential to prevent a further descent of the two new countries into war,” said UN peacekeeping chief Herve Ladsous, warning the Security Council that renewed fighting would also destabilise the region.

Aguer said the SPLA was preparing “to defend its territories” from further attack with 2,000 troops heading for the border from South Kordofan state, where the Sudanese army has been battling rebels aligned to the south since June.

“There is a brigade coming… The SPLA has been tracking their movements and they left Deleng (a town in South Kordofan) yesterday,” he said.

Sudan’s army said last Saturday that it had captured camps around Jau of South Kordofan rebels, in what it described as a strategic victory, adding the area was a key supply route connecting the rebels to the south.

Aguer insisted only the SPLA was deployed in Jau, which was “deep inside South Sudan’s territory” and not used by rebels.

The two countries have traded accusations over supplying rebels within their borders for months and reported increasing cross-border attacks that have aggravated tensions and threatened to undermine negotiations on oil and territory.