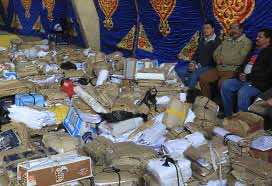 Islamists, poised to dominate Egypt’s next parliament, appear to be on a collision course with the ruling military over the role of Islamic law in the country’s future constitution.

The Muslim Brotherhood’s political arm, the Freedom and Justice Party (FJP), on Thursday spurned a military-backed advisory council which would have a supervisory role in drafting the next constitution.

“Any attempt to intervene in parliament’s work in drafting the constitution would be a violation of the people’s choice,” the Islamist party’s spokesman Ahmed Sobea told AFP.

The next parliament is likely to be dominated by the FJP, which won 36 percent of votes in the first of three rounds of elections, followed by the ultraconservative Salafist Al-Nur party with at least 24 percent of the vote.

Speaking to journalists on Wednesday, one of the ruling generals said the next parliament would not be representative enough of Egypt’s 80-million people, including roughly eight million Coptic Christians, to draft a new charter.

The military, the cabinet it appointed and its new advisory council would have a say in writing the constitution, he said.

Political analyst Mostapha Kamel al-Sayyid said the Islamists appeared headed for a confrontation with the ruling generals, who took charge after president Hosni Mubarak’s ouster in February and suspended the constitution.

“As long as the Brotherhood doesn’t accept a consensual formulation to agree criteria for the (constitutional panel), we are heading for conflict between parliament and the military,” he said.

“The Brotherhood is showing signs that it wont compromise as signalled by their withdrawal from the advisory council,” said Sayyid, a political science professor at Cairo University.

The FJP and Al-Nur have relatively liberal party programmes, in keeping with a law that bans religious parties.

But given the Muslim Brotherhood’s advocacy of an Islamist state, and Salafist aspirations for an even more rigorous application of Islamic law, the military appears to suspect their intentions.

The military, long the most powerful institution in the country, has warned that it would not allow “another Khomenei” to rule Egypt, referring to the leader of Iran’s Islamic revolution Ayatollah Khomenei.

Its suspicions are shared by analysts and liberals, who say the Brotherhood’s first priority would be to bolster Islam’s place in the new constitution.

“This panel (that will draft the constitution) will have to represent all parties, and parliament may not be representative,” said Mohammed Abu Hammad, a senior official with the liberal Free Egyptians party.

“The majority may be Islamist, and Islamists don’t represent all of Egypt,” he said. Hammad won a seat in the first round of voting, but his party’s coalition won only about 15 percent of the vote.

“The Brotherhood want to fortify Islamic law’s place in the constitution,” said Sayyid.

The FJP has also demanded that it be allowed to shape the next cabinet, something the military has rejected outright.

In the suspended constitution, the second article said that the principles of Islamic law were the main source of legislation.

It was a vague formulation, which could easily have been interpreted as a reference to values such as justice and democracy, and Islamists in parliament are likely to insert a more robust formula in a new constitution, Sayyid said.

The Islamists have already organised mass rallies against plans by the military-appointed cabinet to outline overarching principles that would bind any future constitutional panel.

The Brotherhood in particular has refused to join anti-military activists who demand an immediate transfer to civilian rule, and shunned days of deadly anti-military protests in November that left more than 40 people dead.

But it has shown itself willing to escalate opposition towards the military, and if it does it would pose a far more formidable threat to the generals than the largely marginalised leftist and secular anti-military movement.