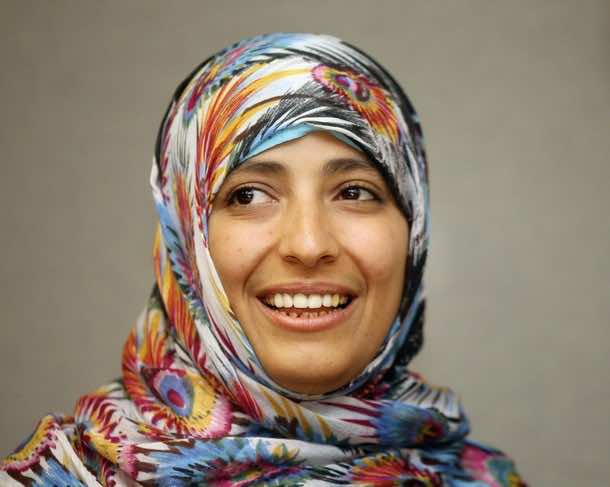 The three winners of the 2011 Nobel Peace Prize on Friday dedicated their award to women and their struggle to leave behind the role of victims and instead help lead the world towards democracy and peace.

“I am so proud that I am here. Thank you Nobel Peace Prize Committee for choosing me, as a woman in Yemen, as a woman in the Arab world,” Yemeni “Arab Spring” activist Tawakkol Karman enthused at a news conference in Oslo.

“You chose women because you know that the period that women appeared as victims has ended. … Now women they are leaders. They are leaders not only of their country or leaders in their struggle, but leaders in the world,” said the 32-year-old journalist — the youngest winner of the prize in its 110-year history and the first Arab woman ever to win a Nobel.

“You will see what the new world will be,” she added, wearing a white headscarf with dainty red flowers and sitting alongside her fellow laureates, Liberian President Ellen Johnson Sirleaf and Liberian “peace warrior” Leymah Gbowee, a day before the official prize ceremony in the Norwegian capital.

Gbowee, dressed in an embroidered sapphire blue dress and matching headdress, also hailed the three women’s win as proof that women had finally been given a seat at the table.

“When you talk about Africa and conflicts, the first image that appears is … rape, abuse and exploitation. The last image that comes to their mind is the image of women trying to fight for peace,” she said.

“But today, my selection and the selection of my mother Sirleaf and my sister Tawakkol is a reflection and an affirmation that finally the women of Africa, the women of the world, their roles in peace processes has been acknowledged,” she said.

“No longer will the world exclude us… the world is finally saying to us: your skills … have been recognised and we are prepared to work with you,” added the 39-year-old social worker who led Liberia’s women to defy feared warlords during the country’s 14-year civil war that ended in 2003.

Gbowee’s compatriot Sirleaf, Africa’s first democratically elected woman president who last month won a second term, meanwhile said she would accept her prize on behalf of women, “particularly the women in Africa, who have had a subservient role in our society, who (live) sometimes under very, very difficult circumstances.”

Despite the towering challenges women face, Sirleaf stressed: “I am here in this position (of president) because of women … who decided it was time for a woman to be in charge.”

As for what she plans to do going forward?

“I’ve got six years to work for the next democratically elected woman president in Africa,” she said to thundering applause.