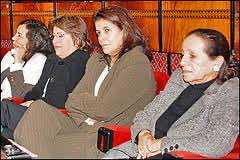 The increase in the number of seats allocated for women in the House of Representatives (Lower House) is a “huge step forward” for Morocco, Vice President of the US NGO National Endowment Institute (NDI) said.

“We have to persevere in our efforts aiming at supporting the momentum of reforms in Morocco,” Shari K. Bryan said at conference organized on Thursday in Washington under the theme “assessment of opportunities and challenges after Morocco’s legislative elections.”

The Vice President of the NDI, whose representatives were among the 4000 national and international observers who monitored the legislative elections of November 25th, added that the Moroccan civil society showed its ability to contribute to consolidating the democratic process in the Kingdom.

On her part, Audra K. Grant, a political scientist at the RAND Corporation, highlighted the “peaceful, free, and transparent” climate that marked the conduct of the elections, noting that this popular consultation, the first under the new constitution, is part of a “well-established” tradition of reforms in Morocco.

The specialist, who has worked on topics related to the momentum of political Islam in North Africa and democracy and governance in Africa and the Middle East, also highlighted the optimism spurred by “the commitment of King Mohammed VI to substantial reforms” and the consolidation of the democratic process.

Former US ambassador Edward Gabriel, who moderated the debate of the meeting, commended the distinctive character that characterizes Morocco in a regional environment marked by uprisings and upheaval, noting that the momentum of reforms took place in the Kingdom before the advent of the “Arab Spring”.

The massive popular support for the draft constitution proposed by HM King Mohammed VI, as part of the July 1st referendum, reflects “strong and steadfast” links between the Sovereign and his people, on the basis of a new vision advocating regionalization, human rights promotion and judicial independence, he said.