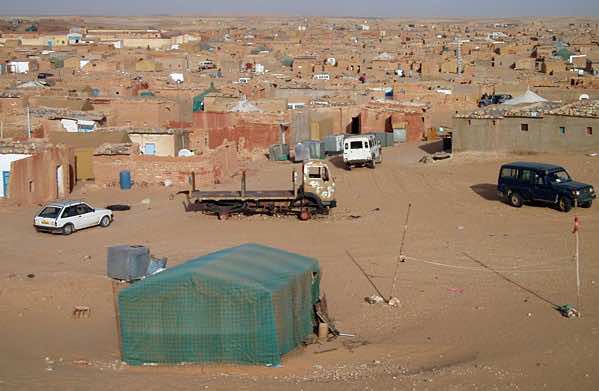 Close to the town of Tindouf in south western Algeria, not far from the border with Morocco, lay the camps where tens of thousands of Sahrawis have been warehoused for the last thirty five years, stripped of their basic rights and of their rights as refugees.  The camps are on Algerian soil but Algeria delegates their administration to the alleged liberation group called the Polisario, which is in total contradiction with international law according to human rights organizations.  On the other hand, Algeria gives the status of “refugees” to the Sahrawis but doesn’t apply the 1951 Geneva Convention and the 1967 related Protocol to them.

The Sahrawis living in the camps do not have the right to move and settle on Algerian soil, or in any other country of their choice, nor are they allowed to engage in gainful employment. The US committee on Immigrants and Refugees and the Washington-based Moroccan – America Center call this a form of “warehousing”, whereby the Sahrawi population is sequestrated and held within the camps against its will for political purposes.

Moreover, despite repeated calls from UNHCR and other international organizations and bodies, Algeria refuses to allow a census of the population.

The World Food Program provides rations to 125000 people, but independent sources using aerial images, estimate the Sahrawi refugees in the Tinduf camps at 60,000 to 90,000.

A good part of rare humanitarian aid has been documented to be smuggled by Polisario and Algerian officials and sold on the black market in Algeria, Mauritania and even in Mali and Niger.

In addition to being denied their rights as refugees, the Sahrawis living within the camps have suffered forced disappearances, the cases of which have been documented by international human rights organizations.

Women who get pregnant out of wedlock are jailed, a practice that is not denied by Polisario officials. Children are taken away from their families and deported to Cuba for indoctrination purposes, a practice that is in contradiction with international conventions regarding the rights of the child.

Saadani Maoulainine is now in her late twenties but still remembers when the Polisario tortured her father and humiliated her family before deporting her to Cuba to be indoctrinated into revolutionary ideas and anti-Moroccan rhetoric. She was severed for years from her culture, language and background. Saadani still sheds tears as she recounts her suffering to the World.

Saadani feels lucky that she has joined her mother in the Sahara but thousands of others who were uprooted from their families in the eighties and are now in their late twenties are not so lucky. Some of them did not have a choice but to settle in Spain upon their return since their knowledge of the Sahrawi version of Arabic and culture is close to nil.

Political expression within the camps is muzzled and strictly repressed. The most recent case of abuse of the right to political expression and freedom has been that of Mustapha Selma Oueld Sidi Mouloud, who was kidnapped, jailed and probably tortured because he dared to support the Moroccan proposal for autonomy in the Sahara. After pressure from world governments and international organizations, Algeria and the Polisario released him but they denied him entry to the camps and reunion with his family.

When will the international community and world conscience wake up and come to the rescue of tens of thousands of Sahrawis held against their will and trapped as pawns in a political game that strips them of their basic rights?

How can we tolerate that, in the twenty first century, people are warehoused as alleged refugees with no right to identity, freedom of movement or gainful employment at a moment when countries like Morocco, Spain or Mauritania are ready to receive them and allow them to mingle with their respective societies and achieve their life dreams?

It is high time that world leaders and world public opinion said NO to the use of innocent people in geostrategic games. For thirty five years, Sahrawis have suffered under an illegal Stalinist system working on the soil of a sovereign nation that denies them their rights while at the same time swindling a good part of the humanitarian aid the international community mobilizes to keep them alive. It is high time we all said:

halt to the suffering of Sahrawis in the Tinduf refugee camps in Algeria.

*Lahcen Haddad, PhD, is Academic Director for the Vermont School of International Training and Senior Associate of the DC-based Management Systems International.